A chef (Renette Vosloo) and a chanteuse (Willemien Rust) have hooked up to present evenings of cuisine and song in  Tshwane:

It’s not a new idea, but it is the freshness of the approach, the two individuals involved and the absence of these kinds of events, that makes this something special.

What they have done is taken their unique strengths – the one song, the other cuisine – and formulated a season of evenings where the one puts mouth-watering food on the table, and the other interprets the different dishes with a song from a chosen culture.

It started last month and runs until the beginning of October.

It’s a way of playing with fun themes, tantalising the imagination and entertaining guests in a novel way – allowing them to escape a harrowing world out there.

That’s what good entertainment always does – and they’ve sealed the deal. 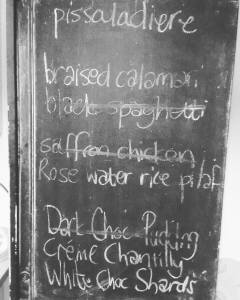 Those interested in food, might know Renette Vosloo as the Rooitamatie (red tomato) chef whose restaurant has had a few transformations in Pretoria, others might know her from a top-4 appearance on 2014’s Kokkedoor on Kyknet or her presenter’s job on Saturday mornings’ Ontbytsake (7.30 am on Saturdays on Channel 144 with repeats). Her food story with cooking in a 13-episode series will be broadcast next year.

She’s back in the capital city with her Rooitamatie guest house and supper club. It’s always been her preferred way. It’s all about visiting a home – and that is where she is most comfortable. If that’s not your idea of fun, it’s not for you.

The guest house is situated between two major hospitals (Zuid Afrikaans and Jacaranda) with the bulk of their guests focussed on hospital visits.

The supper club which spills onto the front balcony and then into the garden doesn’t take too many diners which makes it an intimate evening and one best enjoyed with a group of friends. They offer dinners only when booked for a group of six or more. They’re not licensed and the menus are discussed with diners before the time .(renette@rootamatie.co.za). 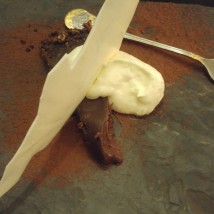 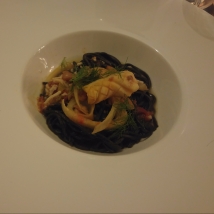 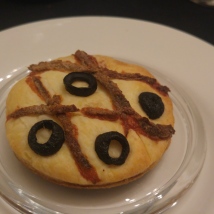 On the night our menu started with an amuse bouche (pissaladiére, almost like mini pizzas), a particular favourite of the chef, with anchovy, a hint of chilli and a light pastry accompanied by Francois Hardy singing about young love; followed by a starter of black noodles, squid ink,  braised squid, slow roasted tomato “bouillabaisse” to the sounds of Emily Loizeau’s Eaux sombre; Carla Bruni’s Quelqu’un m’a dit where the sounds invest the fleetingness of life with the original flavours of saffron chicken, tarragon cream, rose water and almond rice pilaf; and what else with the decadent dark chocolate tart, white chocolate shards and white crème Chantilly than Edith Piaf’s iconic Non, Je ne Regrette Rien?

This is where Willemien (also known as Willemien/Philomène Rust -née Heyns) steps in. The two great loves of her life: French and music. (The Philomène side of her name, she laughingly describes as a bit of an identity crisis! But it also encapsulates who she is and what she does.)

For the past six years she has lectured in French at the University of Pretoria. In 2014, she received her Masters in French, and in all this time, she was juggling many balls – perhaps too many. The non-academic side of her life was dominated by music, her own solo singing but also numerous collaborations. And suddenly – as it would with her kind of passion and talent – the music has emerged very strongly and she decided to take a creative sabbatical this year for as long as it takes.  “I’ll be back in academia at some stage,’’ she says referring to herself as a creative entrepreneur who performs, presents creative writing programmes where French is taught (on invitation) and also does film translations. 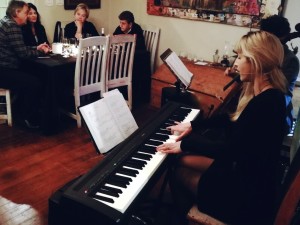 Before she presents her interpretation with a song, Renette introduces the dish and then before the performance, the singer explains the intuition that determined each individual taste. Willemien believes this year is her time and she’s left her day job to concentrate on her singing. Sometimes it will be the music of others and at other times, it will be her self-penned songs in theatres and at festivals.

With her French background, selecting an evening of French music is an excellent choice. She obviously feels at home, knows the music which allows for inspirational choices and acts as her own accompanist on piano. She also invites a friend to add extra instruments for texture and ambience. On the night it was Pieter Bezuidenhout on accordion and synth.

She determines her menu choices by selecting one iconic/popular song, and uses contemporary singers to introduce recent sounds, with some of her own compositions to showcase her own work. Before the dinner starts and once it has concluded, she plays light background music.

This is how her music is given centre stage.

It is a night full of surprises. The ambience is warm and comfortable with the odd dog meandering through the room, and one almost expects a toddler to stick his head around a door. It’s that kind of place. The food is imaginative and tasty, and the music a worthy companion on the night.

Ticket includes: 4 course meal with wine; live intimate concert “paired” with each course. Bookings at least a week in advance at philomene.et@gmail.com