The Pretoria Art Museum, in conjunction with the Association of Arts Pretoria, is presenting a major retrospective exhibition by South African artist Margaret Nel at the Pretoria Art Museum until January 28, featuring a selection of over 70 paintings, spanning a career of over four decades. 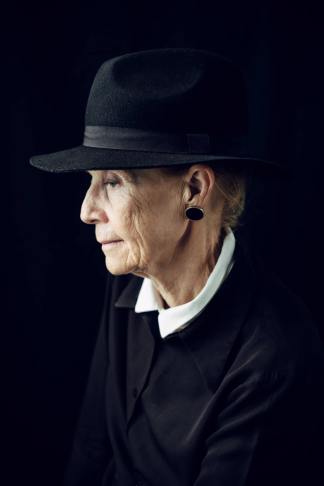 Due to popular demand, the Pretoria Art Museum will be hosting a final walkabout of the exhibition A Retrospective: 1970 – 2017 on Saturday,  January 20 as the artist Margaret Nel discusses selected key works from the show.

Entry to the museum is free for those attending the walkabout. Light refreshments will be served before the walkabout commences at 11. Book your spot at info@margaretnel.com by Thursday, January 18 .

For those unable to attend the walkabout, but who still wish to view the exhibition, the show closes on Sunday, January 28.

DIANE DE BEER spoke to the artist just before the opening:

Artist Margaret Nel’s world reflects her artistic mien, from her art to her home and her personal style.

She lives in Pretoria’s famous round house on Tom Jenkins drive and upon entering the space, the way she has fashioned her interiors – from the paintings on the wall (her own work and others) to the interiors – the way she presents herself, all has a specific artistic ambience. It’s almost as if one is moving with and walking into an evolving artwork.

In the process of finalising her exhibition, we chat about a career that stretches from the 70s and is ongoing. “I am always painting,” says Nel. “There’s not a year that goes by without having produced something.” She is already working on an exhibition to be presented at the Oliewenhuis Art Museum in Bloemfontein next year.

Apart from a period in the 80s, when she stepped away from her art because of a young family and life in general, it is what occupies her heart and her mind and what she surrounds herself with. And when perusing the information available on the current exhibition, everything she does is done with a fine eye for planning, not leaving anything to chance.

She has even thought about the criticism ahead of this retrospective. But she’s excited and keen to hear what people think, especially the knowledgeable ones. As someone who shows her work, she knows viewers feel and have the right to criticise. While as a young artist, she might have struggled with that, now it is something she embraces.

She wonders how others will view her progress, something she is quite happy with. “I am confident about my work,” she says softly. And that steely demeanour might have something to do with the fact that while studying and starting her career, female artists always found themselves attached to part of a boy’s club. “We had to deal with that, always in the minority.”

Now, regarding her work in a retrospective, she is interested to see how it holds up in a solo exhibition. “Usually it is juxtaposed with the work of other artists and then it becomes difficult to judge,” she admits. She realises that certain periods like what she refers to as her Post Modern period could be perceived as out of step but believes the themes are even more relevant. “I touched on subject matter, such as xenophobia and diminishing and compromised natural resources, at a time when these issues were not as relevant as they are currently.”

The original title of the exhibition was Loss as it felt that as a concept, loss was the overarching theme, connecting the five distinct periods that her work falls into, over 40 years.

“Loss of identity and control and loss of mental acuity are covered in the early period titled The Outsider as well as in the second titled Barren Land, where loss of culture and heritage as well as the potential loss of a sustainable future are also explored. The third section titled Incident talks about loss of security and a place of safety, specifically in the South African context but also in the global context.

“The fourth section titled Exposed deals with loss of protection from outside elements. And finally, the fifth, deals almost exclusively with universal feminist issues such as loss of identity, and loss of youth, loss of a voice in a male dominated society. I also obliquely speak about domestic abuse in the latest work, a subject very close to my heart and very difficult to comment on in a subtle way. Cuts of meat, enclosed in a fragile skin of plastic which is often shown ripped open is used as a metaphor.”

“I use models, myself included, not to paint portraits but to try to get across an idea. The double portrait of myself where I used a cell phone to capture a ‘selfie’ is titled Isolate and speaks about old age, loss of youth etc etc.” She shows herself as she really is – warts, ageing et all. There’s no fooling about here. Art is a release, therapy, autobiographical if obliquely so and you must face it head-on.

“Ultimately I explore aspects of the human condition that have directly touched me.”

Nel strikes one as someone who makes very specific choices in life. She might seem the introvert when one first meets her, but easily opens up and shares her feelings when she feels comfortable – her choice.

Her reason for showing her work in this large retrospective is also specifically driven. She admits, as artists should, that she wants people to see her work. “And hopefully educate and make people more aware of the issues that I find important.”

All her paintings have very specific titles, offering the viewer a key to unlock the work and she has detailed descriptions that might further the understanding of the artist’s point of view. But she is as thrilled if other layers or meanings are uncovered and explored by viewers.

“The work can be interpreted on many levels though, even quite superficially, and ultimately it must be left up to the viewer,” she says firmly.

Her art is eye-catching, intriguing, draws you in, challenges and encourages you to engage with many different emotions. This might be her chosen landscape, but with individual interpretations and varied life experiences, different people will react and embrace the work individually.

And that’s how it should be and how it is intended.

Open: Tuesdays to Sundays 10am to 5pm