Lebo Toko in The Man Jesus

The combination of Robert Whitehead as visionary director and Lebo Toko as flamboyant actor is sheer brilliance.

That’s what keeps you glued to the seat, watching perfection as it unfolds on stage. It starts with the vision, the look, the execution, the sound and then of course the performance – how it should play – and how that is pulled out of a hat!

From the minute Toko bounds on stage, rapid-fire stream of consciousness from his mouth, and transformations with the flick of a wrist, tie of a scarf or sound of his voice, he transports you to a fascinating world.

It’s about a man called Jesus, the way he is affecting different characters in that particular scenario and how the story plays out. Think about that time. Palestine writes Whitehead was a country under very harsh Roman rule. The Jews did not accept the “Pax Romana” and this made them difficult to control.

All in all, it was a country in chaos with this man called Jesus further upsetting the rule of law. But with the story comes an array of characters, both men and women, who describe the impact of this man and the way he was doing and saying things.

And a sleight of hand, introducing a South African flavour, with accents, types, characters, indigenous phrases, all turn the content from the beginning into something that could happen now, makes it accessible and intriguing as you try to re-imagine the time and the people and how they experienced what was happening all around them. 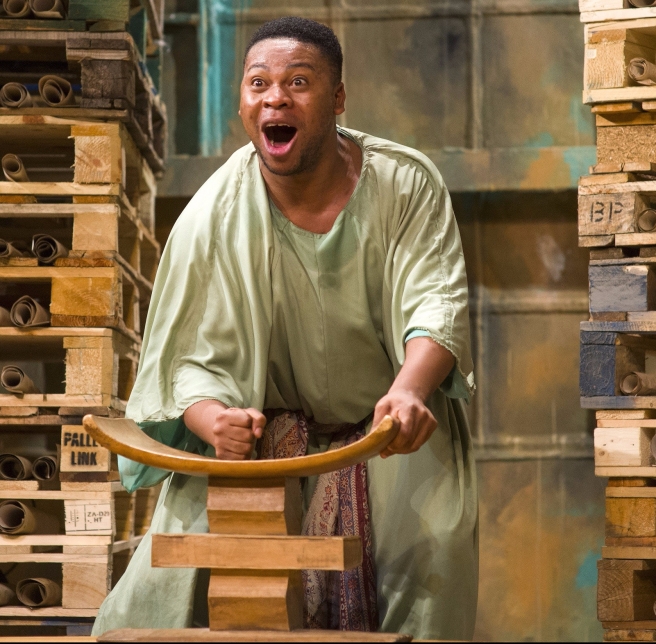 In today’s chaotic political environment nationally and internationally, anything seems possible and it is easy to step into that place of people performing miracles, water changed into wine or people following someone who brings hope and dreams they want to cling onto.

With the music and the soundscape, Whitehead establishes a pace and a space enhanced by a set that is imaginatively constructed as it allows for many different settings. But there’s not much time for any of that because Toko is the one that controls and takes the stage.

It is a mesmerising performance that is magnificently reined in yet has that ability constantly, just under the surface, to explode capturing what we are dealing with in these different characters.

To give this performance, the lengthy and wordy script had to become part of Toko’s being and it does. There’s no thinking about what he has to say as it simply flows from one character to the next in different voices, with a variety of inflections which time and again become part of a particular persona.

It is what holds you from beginning to end as he cajoles, charms, chides, coaxes and chastises while telling each individual’s story, how he/she perceived the man Jesus and what was happening in front of their eyes.

It’s an extraordinary double act which needed both the directorial insight and then that possibility of a performance that would inhabit different people without it simply becoming gimmick and not give the audience the real people – which Toko does time and again.

As an actor, Toko has often shown his ability to stand out and grab centre stage, but this is in a different league. He draws you in even while he has you watching in astonishment that he manages to pull this off. When he says theatre is his church, this performance is proof of that.

If anything, the play was a letdown. From the start it hones in on how different people perceived what was happening in their world with the appearance and disruption of the man Jesus. It is what makes it intriguing, gives it a contemporary and cutting edge as you transpose that story, from so long ago, to what is happening wherever you choose to go with the now.

But then, more than halfway into the story, once Jesus sits down to have the last supper with the “gang”, it turns into a more traditional telling of the gospel and a much more predictable play. The scene with Lazarus for example could easily be cut which would benefit the time that at that stage starts to drag.

But that’s my gripe and while it detracted from the overall production, nothing could diminish the brilliance of the sound, design, direction and the acting.