He – A Novel by John Connolly (Hodder & Stoughton):

You probably have to be of a certain age to know or even recognise the names Laurel and Hardy. If you’re not, you might be more familiar with the name Charlie Chaplin.

They’re of the same era and if you’re being generous, ilk, but Chaplin was the one who grabbed the world’s imagination and with reason.

Yet Connolly, a writer perhaps better known for his Charlie Parker stories, has always been someone who every once in a while, lunges off in a contrary direction to the delight of those who follow him. Even when we’re fans of Parker, it’s good to travel with the writer on his other journeys as well, to see where he will take us.

And this time it’s truly intriguing. I remember watching Laurel and Hardy as a child and loving these two contrary characters who got into all kinds of scrapes. Their tomfoolery amused me at a very young age and as I grew older, they disappeared. Even though my interest has also been movies, I didn’t have the dedication of this writer.

When I realised just who this book was dealing with, it was fascinating to witness how Connolly approached his subject and how he told this story. He is very clear that it is not biographical, calling it a novel and a reimagining of the life of one of screen’s greatest comedians 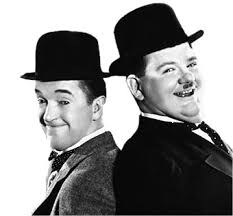 And the back page is also quite clear with the following precis:

he was one of the most famous screen comedians in the world.

he was loved by millions.

he was divorced 4 times.

he was betrayed by his idol.

he lost a fortune.

he lost his greatest friend.

he is Stan Laurel.

Now in a quiet room by the sea, at the closing of the day, he remembers.

One must assume that the bare facts stick to those of Stan Laurel’s life, at least what is known. But Connolly walks us through this ultimately sad man’s life and he does it purposely in this almost painstaking way as he sketches that which we are mostly unfamiliar with – behind the scenes. And in those days, it was still true and did still happen.

There wasn’t any social media and stars were still stars even though they were always on a tight leash because of their careers and the image they had to adhere to and project.

It’s almost as if some of them could not resist but behave like naughty children all their lives, because that’s how they were treated by the studios.

When you think of Laurel and Hardy, it is Stan Laurel’s sad eyes that haunt you. It is the ultimate picture of the tragic clown, the one who makes others laugh but cries within. Connolly writes that he also had memories from his childhood, but this novel is about more than memories. It’s almost like a love letter to a time gone by when there was still space for private lives even for those who lived so publicly.

That’s what is best captured. This man seemed so open on screen and yet he was duped by almost everyone in his life. He held onto those who he should have let go and allowed those who really made a difference, to get away.

And once his partner in crime, Oliver Hardy, died, he felt his life was diminished.

Connolly is an extraordinary writer and once again his curiosity and imagination takes his reader down an unusual road. While I wasn’t always sure whether I really wanted to get this much into the life of Stan Laurel, by the end of the book, what the author describes as a construct of a life, is compelling because it captures both a time and a world that is long gone and imagines how people functioned in what seems like much gentler times.