June is Youth Month and DIANE DE BEER discovers the Pretoria Art Museum is celebrating that in style:

Arriving at a walkabout of the Pretoria Art Museum’s Genesis II’Xhibition (on until July 1) on a Saturday morning I am intent on discovering a few things. Everyone living in Pretoria and interested in the art scene will know that the museum is not as lively as it once was, but they will also have to concede that there are many events and exhibitions happening that aren’t well attended.

This was exactly what happened at an exciting exhibition walkabout on Saturday morning. It features work by a group of young Educational Assistants at the Pretoria Art Museum. They are responsible for conducting guided tours and occasionally facilitate art-making workshops as part of the museum’s education and development.

This exhibition is the second installment since it was first implemented in 2003, when the first group of volunteers unconventionally proposed to the art museum to have their own exhibition as a benefit for giving of their time to the museum. The name Genesis was picked to signify the endless possibilities for the participating artists at the outset of their careers. And hopefully it will happen more regularly in future.

But I digress, Mmutle Arthur Kgokong, the cultural officer: education and development who hosted the event had cleverly combined another exhibition currently on at the museum by inviting one of the participants to do a live art intervention. Not only did that make the other participants aware of the exhibition but it also introduced the students to yet another avenue in which to practice their art.

In the Public Domain: shifting boundaries between the private and the public, is an exhibition by lecturers at the University of Pretoria that runs until June 24 with a walkabout at 11am on Saturday June 23.  It’s worth popping in if you’re around in Tshwane.

The exhibition deals with the notion of shifting boundaries as thematic interpretation as a stimulus for debate, as this exhibition accesses individual artists’ interpretations of contemporary society.

And what Nicola Grobler did with the young students is introduce her on-going art intervention by bringing a backpack of discoveries in which she piqued the curiosity, with art also a part of the presentation, but more importantly a way of looking at the animal world without making the usual assumptions. And of course, wider implications.

But then it was back to the young artists and their work. It is impressive to witness the creativity of the TUT art students (and this is just a small section) and their participation in the art world. All of them are aware that this is not the easiest route to follow for a career, but some are doing extra educational studies which will allow them to combine their art with education, while others are already lecturing while finishing their 4th year and yet others are looking at an academic future. All of them are determined to keep at practising their art.

I was again struck by the way that art tells our stories and how we understand and get to know other people when we take the time to experience their storytelling whether on stage or in paintings. How would I have known about this young painter who grew up in a rural area who read himself silly as a youngster and thus started using scripts as part of his paintings? It doesn’t always mean something, but it certainly tells stories as he goes back to his childhood friends and family for inspiration. 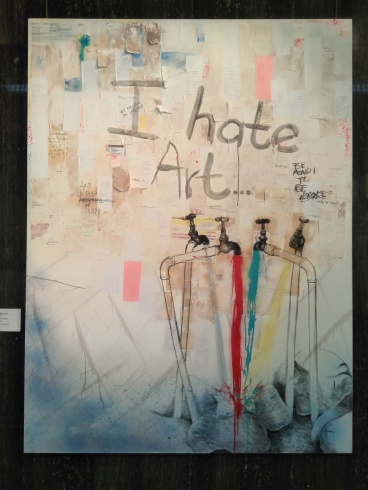 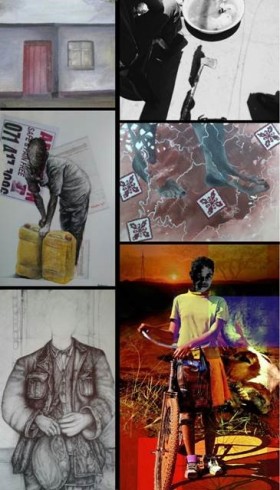 Another of the young painters lives in the city centre and sometimes must push himself to attend class because his inspiration is where he lives. He currently uses water gathering as the focus of his work but also incorporates something he calls found scripts/words which he relates to found objects, but these are pamphlets on abortion or Mr Price sales slips, all which start having a conversation with the viewer.

And then there’s an artist who proudly speaks of the techniques he applies to his township etchings. This is provocative work and points to an artist who is someone to watch in the future, but there are quite a few of those in the room. Serious art collectors will know that this is where you catch them – when they’re starting out. Not only is this when you can afford the work but it is also a wonderful way to follow an artist you admire from the start of his career.

Has the Pretoria Art Museum changed these past few decades? Of course, it has. Which public museum or institution is not battling with funding and they can only do as much as their allotted moneys allow. I am also aware that many will be raising their eyebrows that the park has turned into a public space. Cars are being washed on the parking lot in front of the museum and in one corner of the museum grounds, a lively soccer match is being played.

Could it be tidier and more pristine? Perhaps? But I also liked the fact that this very public museum was being surrounded by real life – people earning a living and others taking a break by playing. Now all we have to figure out is how to get those using the public square into the museum. Mmutle Arthur Kgokong was surprised when I mentioned that the perception was that not much was happening. But he had to concede, the real issue was to get art lovers both present and potential to visit the exhibitions and events on offer.

In the meantime, the students and the lecturers are all out there showing their work. Take the time, it will enrich your life.

Open Tuesday to Sunday from 10am to 5pm