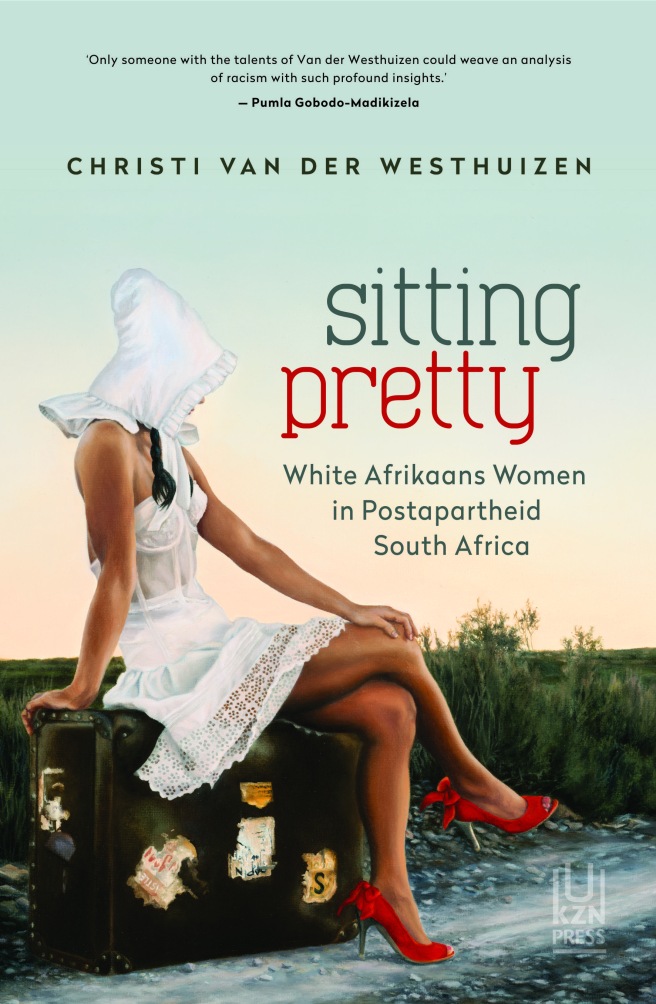 Sitting Pretty – White Afrikaans Women in Postapartheid South Africa – the title is enough to stop you in your tracks. DIANE DE BEER speaks to author Christi van der Westhuizen about the issues that encouraged her to write this book:

How can I not be, as one of that species whom she describes as both the oppressor (as white) yet also oppressed (woman)? Chatting to her about this academic treatise, she explains that book’s intro, which is the toughest of the lot because she wanted to get all the theoretical stuff out of the way at the start. And if you read it slowly – and again once you’ve read the book, even if like me, you are not au fait with academic speak – you will get there.

Van der Westhuizen has a mind that grapples with life and she had enough given to her to make sure that it will be worth grappling for. She grew up in a female-headed household in 1980s Boksburg when the city council was taken over by the Verwoerdian Conservative Party, and the Afrikaner-Weerstandsbeweging was on the rise. “My experience of alienation as a young woman and a lesbian within a patriarchal and racist context made me ask hard questions. People should know,” she says, “that I’m investigating my own life when writing on these kinds of subjects.”

She took her premise from Nelson Mandela who in his inaugural State of the Nation address extended an invitation to South Africans who identify as ‘Afrikaner women’. She starts with that invitation as Mandela re-remembers Afrikaans Poet Ingrid Jonker “and poignantly proffered her ‘glorious vision’ of possibilities of identification:

“She was both a poet and a South African, he said. “She was both an Afrikaner and an African. She was both artist and a human being. In the midst of despair, she celebrated hope. Confronted by death, she asserted the beauty of life. (…) She instructs our endeavours must be about liberation of the woman, the emancipation of the man and the liberty of the child.” He then quoted Jonker’s best known poem, The Child Who Was Shot Dead by Soldiers in Nyanga.

She argues rigorously that Mandela’s invitation to Afrikaner women was “an invocation of the democratic potentialities … amid the ruins of apartheid”. That’s what she wants you to think about, says Van der Westhuizen as she asks whether Jonker’s contemporary counterparts (at least in terms of structural classifications of gender, sexuality, class and race) step into the positions that democratic discourses have prepared for them?

We all know how big an ask the country was given and up to now, how dismally we’ve failed. But Van der Westhuizen believes that the global context hasn’t helped. Because of the neoliberal kind of capitalism that exists today, with its high level of destabilisation and inequality, people feel under attack, which has meant that they have fled into specific enclaves of recognisable identity. It’s a very complex situation.

“Because of all these forces at play, people tend to organise their lives to re-entrench hierarchies and keep oppressive power relations intact.” Previously, she says, the state enforced gender, sexism and racism for us. “Now people are doing it for themselves.”

She is happy that greater diversity exists among white Afrikaans women in the democratic era. For some it is still true that if they don’t adhere to the strict rules laid down mainly by family structures headed by the husband/father, they will be ostracised and banned. But there are those who battle the forces stacked up against them.

Van der Westhuizen points to identity as the main culprit, in those instances where old habits recur, the way the instability and precariousness associated with the current phase of capitalism make people feel threatened and turn inward rather than embracing the diversity that’s out there. There’s no arguing that. Sadly though for those white Afrikaans women given an invitation at the beginning of our democracy to forge different lives. The pressures are many (from family, church, school and society at large) because if you don’t conform. However, that might also plant the seed of resistance.

The book also deals with the fact that this country is unusual as it has two distinct settler groups. “That doesn’t often happen and has its own set of problems, as both groups vie for the spoils of whiteness, with a particular model of heterofemininity attached,” she argues. It’s all fascinating stuff and in a complicated country as ours, with its past, with its diverse cultural groups trying to work together even though all the odds seem stacked against us, it is important to get as much understanding about the issues that confront us.

Van der Westhuizen makes it clear that her study is a qualitative one, which shows what the dominant discourses are that form white Afrikaans women. “If you throw these women together in focus groups, what comes through? It’s about throwing light on what is the mainstream,” she says. “The study also uses dissident voices to do that.”

This was a relief to know, because it was one of my issues when reading this gripping dissertation. I know all over the world conservatism seems to be a dominant force and while locally, amongst both Afrikaans and English speakers, racism seems to be everywhere, it isn’t all pervasive.

But is this where we should be throwing the light? Yes, says Van der Westhuizen and I agree, because white Afrikaans women are the least studied group in the country.

“That isn’t the case for the earlier part of the last century when the Nasionale Manne Party and the Nasionale Vroue Partye (men and women’s parties) folded into one another to form the National Party in the 30s, but after that Afrikaner women seem to disappear from public view and into the home where they were expected to be wives and mothers. But they were homemakers with an edge, as most instilled apartheid’s racism, sexism and homophobia in their children through socialisation in the family,” she concludes.

In a world where the Other is perceived as all-invasive, and many negative ‘isms’ are deployed to subvert challenges from groups with less power, an investigation of a previously dominant group that still holds significant relative power, and the contestations within this group, is fascinating reading.

With its academic slant, it is a tough yet compelling read.