Have you heard of Florence Phillips?

She was the woman who was instrumental in establishing the Johannesburg Art Museum (JAG) and the subject of the play Florence, currently running at The Market’s Barney Simon Theatre in Newtown until August 26.

It is the world-premiere of Florence, a solo play directed by Greg Homann, written by Myer Taub and performed by Leila Henriques in her first solo show. “It’s not an easy premise,” says Homann but as someone who lectures and writes about theatre, how to give a play the best chance to land with an audience, is what he understands best.

It’s also the first solo season for Henriques who has a spirited take on what she describes as an “ambitious piece”.

“I clearly have to focus and following performances, I feel I have to lie down in a darkened room.” And when you see Florence you will understand why.

It’s a bold choice by artistic director James Ngcobo but he also understands that engaging with the city and its most iconic art structure could start interesting conversations. No, says Homann, he suspects, the art cognoscenti, heritage aficionados and people working for Hollard Life are the ones who will know who Florence is. “The Hollard Life offices are built around the original Philips house which is still in use.”

What Taub has done following different interventions around the art gallery, one including a skateboard performance art piece which is also referenced in the play, is engage with different questions featuring JAG as a centre piece. But this time (helped by Homann in the final draft) the story is told playfully while experimenting with time, place, language, and form to explore our contemporary moment.

Instead of the monologue the playwright had started with, it has evolved into a disgruntled actress who over lunch in a fancy restaurant meets with a playwright about the new work he has written that places Florence Phillips as a ghost at the Joubert Park fence outside the Johannesburg Art Gallery. While considering whether she will play the role, the actress imagines what it would mean to portray a dead white colonial figure today whose legacy and value is both contested and forgotten.

And placing Florence in the theatre in Women’s Month underlines the contributions and impact that Florence Phillips had in building a greater understanding of art with early-Johannesburg and its contemporary society.

But it is also this melange of issues almost tripping one over the other that turns this into a fascinating piece of theatre.

Being a woman, it makes sense that Florence is perhaps less celebrated than one would expect, yet it was her philanthropic nature which endeared her to both the world of artists and public alike. She was fiercely formidable, notes Henriques who plays her with great bravado and dexterity as she switches between the fiery Florence and the demanding actress.

In its present form, it also allowed the playwright to play with the meaning of art, its relevance in the world today with special focus on the fence which dominates the essence of the play and divorces the art gallery from its immediate surrounds and the people living there. “We play with the fences in our lives and how we think about our identity,” explains Homann who with his set designer, sculptor Richard Ford, used this metaphor with great impact.

Florence was a woman of exceptional strength, passion, and character to have been able to promote and celebrate local and international artists and to persevere in building them a home at the Johannesburg Art Gallery (JAG). Then as now, this was not the easiest of avenues to pursue. She fortunately had the money to follow her dreams – to the benefit of the city even today. Is that still true? That’s arguably one of the issues addressed amongst many.

And filling the extraordinary Florence’s shoes, Henriques returns to The Market in a role that gives her a chance to explore all her strengths as a performer. And she does exactly that. Taub and Homann have thrown the challenges at her but she’s up for it in what according to her director has been a joyous collaboration – and it shows.

Too often women like Florence are unsung heroes and sometimes their contributions went – and go- unnoticed. But they shouldn’t. The courage they harnessed created indispensable heritage and what happens now is something the play engages with especially dealing with JAG’s colonial past. Perhaps, the playwright argues, the story of our early pioneers can be used in a creative way to engage and inspire the public, including the next generation of woman pioneers but could also point to a more future for JAG. 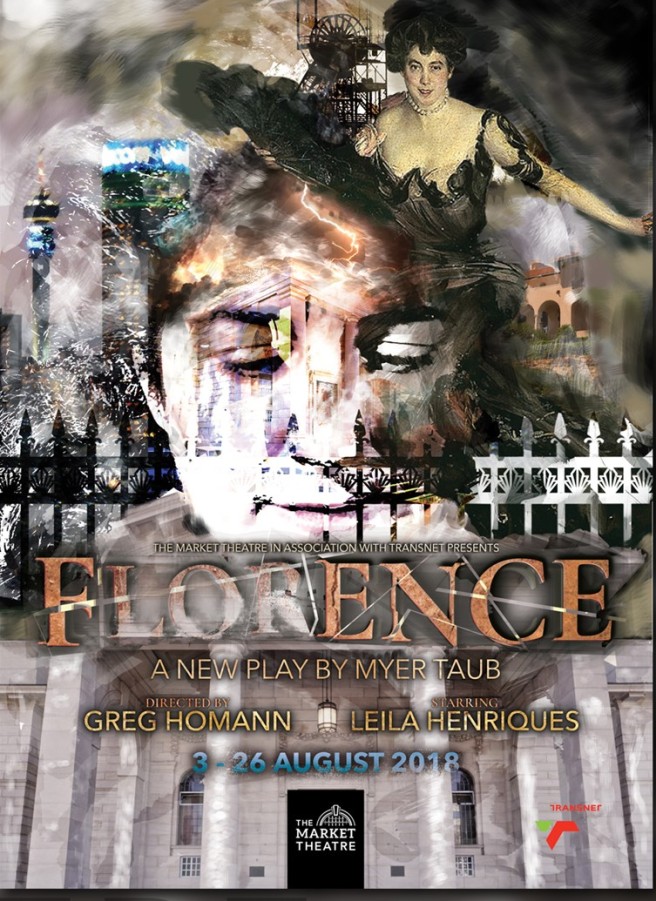 Homann describes the play as a brave choice and on the edge of experimental theatre, but he was at pains to showcase the playfulness in both the writing and the character of Florence. “I wanted to give the audience anchors,” he explains. And here he places emphasis on the love story as well as the gallery. “I didn’t want it to feel too fragmented.” And he has an adept accomplice in Henriques who exploits and explores her different characters magnificently.

The director is also excited to once again give life to a new play, one of his favourite things to do. “It’s about finding and determining the access for the audience.” With something this complicated, the production doesn’t even have to be completely successful, he argues, but the trio most invested in this play are giving their best to make it happen.

He feels blessed that the play allows them to be playful with history because of the inherent absurdity and the humour and here again Henriques and her performance is the perfect foil. She captures the power of this extraordinary woman who stepped out of her comfort zone at a time when it was unheard of to follow her dream while opening a world for everyone around her – then and hopefully now and in the future.

It is that loop of time – then and now – that is intriguing, and it lies in both fragmentation and fluidity. “That’s the key,” according to Homann who describes the play as contradictory, complex and messy. But that’s life especially when living in a city like Johannesburg which he views as the second character in the play. “We’re dealing with memory and how we think of time – moving forward and backwards,” he explains.

It certainly is different to anything else we’ve seen in a long time and that’s what makes theatre exciting. It opens vistas in unexpected ways and takes our minds to places we weren’t intending to go.

It’s an exciting and embracing way to understand the world – especially the confrontational one we find ourselves in today.