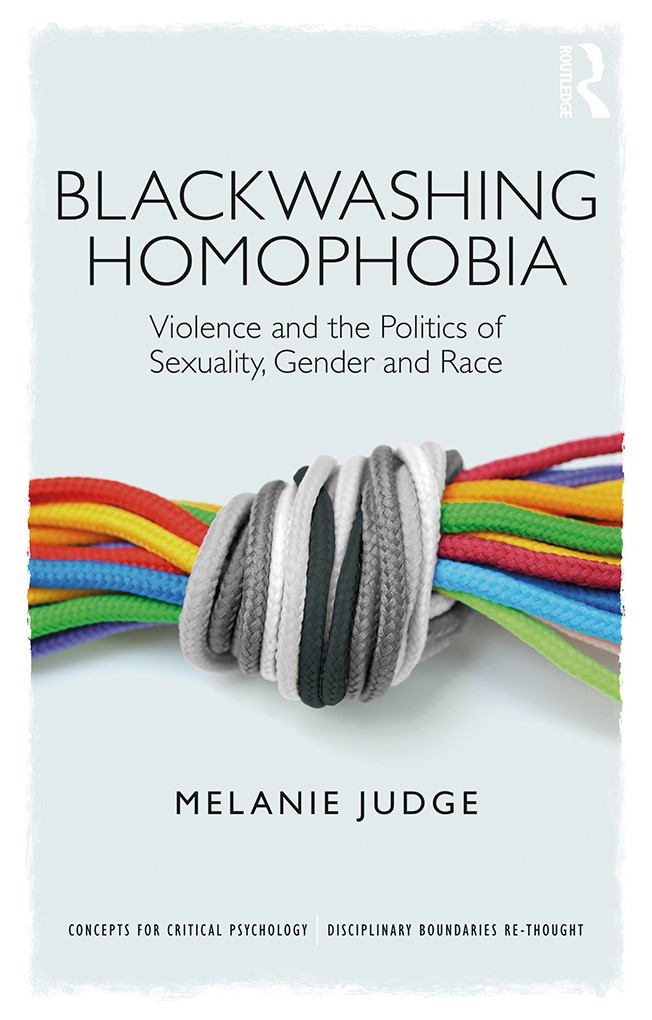 Author and activist as well as adjunct associate professor in the Department of Public Law at the University of Cape Town, Melanie Judge is speaking at the Open Book Fair in Cape Town on September 5 and 7, and then she will also be joining diverse authors at the South African Book Fair in Jozi on September 8 in a discussion titled Feminism – a global conversation. She spoke to DIANE DE BEER about her latest book titled Blackwashing Homophobia: Violence and the Politics of Sexuality, Gender and Race (Routledge, 2018):

It sounds like a mouthful, the title, and it is, but what it captures is the essence of what still drives the world – power and how that plays out in the worlds of especially “the other”.

The title, notes Melanie Judge, is an attempt to think about homophobic violence alongside other types of violence and discrimination, not in isolation but to historically situate it in a South African context. “I wanted to know what fuels homophobia” And adds, “given our history, it is impossible to unpack issues of race and sexuality in South Africa separately – hence the title.”

As an activist, she wanted to understand and glean the multiple dimensions of both the causes and effects of violence and its relationship to race, gender and sexual power.

She notes that violence is always an instrument of power and a way to exercise it. How then are lesbians vulnerable to violence – more so than other groups for example – and in what way do they resist.

Power, she explains is a way to exert control over those who don’t conform to sexual and gender norms. If for example, you’re a lesbian, the implication is often that you’re not a “real woman”. In the book, the specific vulnerability lesbians face is described as “double trouble”, meaning that they are stigmatized because they are women, and also because they are lesbian, and that the trouble the gender system in which men are straight people are dominant. In all cultures, sexual and gender diversity is battle ground on which social norms are defined and challenged.

The book also explores how violence is used to control sexuality and gender. Looking back at colonial and apartheid times, people were governed through violence. “Violence was used to control,” she explains, and that continues to today. “We are a very violent society, so it makes sense,” she argues as she fast forwards to now.

But her focus for the book is on homophobic violence and how it relates to other forms of violence. “How for example does it intersect with racism?” Her argument is that violence props up, establishes and maintains systems of inequality. It is also used to maintain the hierarchy between men and women, gay people and straight people, and rears its ugly head whenever there’s inequality.

It’s important in maintaining the status quo to keep those binaries in place. In other words, if you’re a lesbian, you cannot be a real woman, so you’re always viewed as ‘lesser than’ for not complying with gender norms. And in the end, everyone in society is affected. “Queer becomes a spectacle,” she says, “a kind of anomaly to the ‘normal’ that is sometimes tolerated, just as long as it knows its place and doesn’t disrupt too much”.

If people from the LGBT (lesbian, gay, bisexual and transgender) community are systematically excluded on different levels, it creates a form of marginalisation, something the South African society and its way of conducting life is very familiar with. It was important in this sense for example to explore the link between the everyday insults that LGBT people face and the more brutal forms of violence they are subjected to.

This results in a social environment that makes these more extreme forms of violence possible. Already, for example, white LGBT people who are affluent, escape some of the targeting. In trying to understand this violence, she found that it was often ascribed to blackness. “I find that particularly racist,” she says.

There’s a strong discourse for example about violence in the township and this idea that violence is inherent to black people. What she feels needs to be done is to problematise that kind of misrepresentation because it doesn’t tell the full and thus correct story. “No one,” says Judge, “is naturally bigoted, and we must understand the realities facing black LGBT people as a product of centuries of racial and economic oppression and dispossession.”

But she argues, power inequalities produce violent outcomes. “People are kept in their place in the social and economic hierarchy through violent means.”

She argues strongly that if we want to address the violence, we have to address social injustices. Violence is all about building your identity, who you are and how you function in the world. It is time says Judge that we stop asserting our own right over others in terms of race, gender and sexual superiorities. “We have to establish new forms of social relationship,” she says. “How empty is your power if it can only hold its own at the cost of the other?”

That’s why binaries were so essential during apartheid: blackness and whiteness had to be classified and identified constantly. “Yet, we never have singular identities,” she notes. You’re not just a woman, you might also be queer or straight, rich or poor, and this will shape your life prospects. What defines you never rests on one thing alone and in that intersection is where people connect across difference. “We have a multiplicity of identities. Some of these give us power and others make us vulnerable.”

As individuals we are all complicit in maintaining the current state of affairs but she has discovered powerful and positive resistance against discriminatory social norms.

But how does one erase the past patterns of doing and being in relation to others? It is something that we need to confront in this country especially because of our past and with the hope of creating a different future. “We have to undo everything,” says Judge who knows things don’t just happen as a matter of course.

Systems of prejudice are all about exclusion. “It’s about keeping people in positions of inferiority or superiority that lies at the heart of inequality.”

But she is excited about the divergence and vibrancy of queer life in this country. “We are in post-apartheid and to some extent with huge advances, but the law has largely run its course in how far it can take us towards a more equal society.” She believes that with the firm footing of legal equality, the battle ground can, and has, shifted to the religious and cultural spheres. “It is important that we change the way we relate to one another, and that we change social structures to be more equitable and inclusive.”

“We have to think back before we can go forward,” are her sage words of advice. Homophobia is part of the legacy of colonialism and apartheid. “We can’t approach the now if we haven’t dealt with the past,” she advocates.