READING IS A CONVERSATION. All books talk. But a good book listens as well. 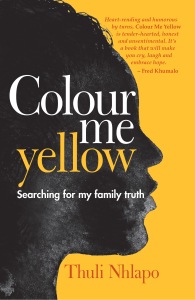 It’s so often a matter of birth and where you land on this little planet – in what shape and form that – determines the rest of your life – as this title subtly suggests.

White people are seldom or never called out on the colour of their skin while black men especially in the US approach every morning as they leave their home with a certain trepidation. To be a woman in the #metoo era might be exciting for some but for far too many, they still have a target on their back. Just listen to the horrifying news from India for instance.

You could find yourself as a stateless human being if you’re of a certain ethnicity in Myanmar and whether you’re born in North or South Korea has huge implications.

It’s not only this time although everyone probably feels that of their time, but life seems particularly harsh now. You need all the help you can get, starting with your family, to make it in this world. If you have to battle them as well, life can be extreme.

The only person who knew the whole truth had stayed mum, not once volunteering to talk. The closest she had come to it was when she said: ‘I hated being pregnant with you.’ Hearing that mantra as a child already in a hostile environment doesn’t bode well for your future and it is exactly that story the journalist Thuli Nhlapo was determined to unravel and expose – if only to herself. She knew it had to do with her father but she didn’t know who he really  was and her mother was not going to tell.

In the meantime, from the day she can remember, she was harshly treated by her family. I felt I needed to prove there was absolutely nothing wrong with me – even though I may have been yellow or a boesman, I breathed and bled like any normal human being.

And this starts with her family, those closest to her, her mother and father, who have to mirror the outside world to a child. What chance does she have with those who don’t know her if this is the reaction of those who do?

But one can imagine that in today’s environment where dysfunction is usually a family trait, there are many children who battle with those closest to them, those that should protect them, often in a fight for their life, or as Nhlapo confesses, a struggle for her soul.

Where she has been blessed is that she has an ability to write (was winning as she says, writing and journalism prizes left, right and centre), which also means that she could organise her thoughts, think like a journalist and investigate her own past – with the accent on the identity of her father. As she grew older, this became more and more of a problem with even the spirits rejecting the surname given to her as that of her ‘father’s’. It couldn’t go on this way but her mother was refusing to budge.

It’s an extraordinary tale, but also one of immense fortitude and courage, self-reliance and making it on her own because that was all she knew how to do. When she was struggling with one of her pregnancies, she coped without asking for any help. She ascribes that to being a black woman and that’s just what black women do, but she concedes that the prospective father was out of town – and not a doctor! So that’s what she did, went to hospital and saw a doctor and when he treated her with disregard, she insisted that he do a thorough check-up – and she was right. She knew she was the only one who would be fighting for her life. If she didn’t do it, no one else would step up.

As she forecast, he was lazy in his diagnosis of a miscarriage and she could move on and out and find a doctor who would treat her with care – the care she knew deserved.

Colour me Yellow isn’t an easy book to read but it is written with heroic honesty with a real-life heroine who demands and easily draws your enthusiastic support. It is easy to give as well as a nod to your own much more comfortable life because even without asking, you got what a child needed – her family’s love. It just makes life that much easier and survival not something you have to deal with every day.

But as Nhlapo proves, every life is worth fighting for and finally – for yourself and your children – you will triumph.