Social media and smartphones can play havoc with the way you understand the world. DIANE DE BEER is hoping for a reality check where the picture doesn’t tell the only story:

There are lots to say for both these modern amenities but sometimes – and that probably has much to do with my age – I can’t help but wonder about real life and slow living that is lost along the way. Two examples of their impact had me puzzling just a bit recently.

The one had to do with commuters on a train in Tokyo all so lost in their smart phones, they might – and probably are – be living in a parallel universe. Back home, an invitation to sample the new summer menu at one of Joburg’s premiere restaurants had me struggling to make sense of the moment as single plates of every dish was passed around for diners to sample, photograph and promote to the outside world – at breathtaking speed or that’s how it felt.

On a trip to Japan, our mode of transport in Tokyo was the train – sometimes above the ground and, when we couldn’t do it any other way, underground. But this didn’t really make any difference to the phone phenomenon which was so pervasive it had my whole party pondering the merits of easy access to … well almost anything. And that is the problem perhaps.

It wouldn’t it be smart phones I suppose if we didn’t have perfect access?

It doesn’t take long for foreign travellers to notice that everyone on the train is either on their phone or sleeping. That’s sounds like a rather mild condition when stated like that. But what I really mean, from the moment you walk into the station and then arrive at the right platform and step onto the train, there’s no eye contact with any individual who is probably making this journey twice a day.

It makes sense that they would use this instant source of entertainment to keep themselves occupied during what must be a tedious part of their day. But it is the level of engagement which completely ignores the public space they find themselves in that is quite fascinating.

Given the Japanese innate politeness, it feels especially as if the young men have found a way of ignoring all the social conventions of their society by simply locking into their phones. From the moment they step onto the train and off and beyond, they have their phone pressed – up close and personal – right into their face and they do all of this while grabbing a seat and then they stay put.

There’s no acknowledgement of pregnant women or elderly individuals who might warrant a young man giving up his hard-earned seat – and which they are advised constantly to do via public announcements and one understands why.

But there’s also no embarrassment or losing face, because he is locked completely off from the world happening around him. If they were reading books or even watching news, that would also add some justice to the endeavour but it’s usually games. We did spot some manga to our relief and perhaps three books (always manga) and perhaps two newspapers on our journey. 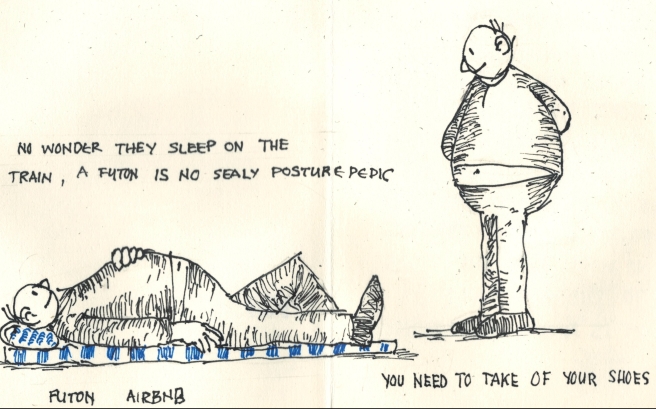 Those on the train who aren’t on their phones (both men and women) are asleep, standing or sitting, sometimes with the phone pressed to their noses. Admittedly, commuting is tiring and while we are on holiday with all the time in the world, this is a hard slog – before and after work – either way.

What is disturbing though is the absence of discovering who these people are. They’re simply missing – any time of the day. It seems that’s what the Japanese do – particularly in Tokyo –when on their commute. The sleeping is less disturbing because tiredness in today’s world is a universal trait amongst workers.

The stress and long days are easy culprits but the cutting off from the outside world, your fellow travelers, to the point of not making any contact at all cannot be healthy. Instead you’re in communication with a machine.

Our fellow commuters seemed lovely people, but who could really tell?

Similarly, a recent media lunch at 54 on Bath’s Level Four to test their new Summer Menu was equally soulless. Don’t get me wrong, it’s not the function that’s at fault, it’s what the world has become and what we have to do, to survive. By ignoring the process and going simply for goal, depth and thus lasting impact is missing, to my mind.

Previously – and not that long ago – a tasting menu would actually include having a meal, conversing with you fellow diners, testing the temperature of the room for conviviality and all those other benefits that add to a great meal.

Call me old fashioned and I am when it comes to this kind of stuff, but simply gathering around a table while the starters, then mains and concluding with desserts are placed on the table while everyone has the chance to sample, doesn’t do the food any favours. There’s too little time to savour and chatter about the food, because everyone is busy taking pictures and posting it on one of the many social platforms all of us use to promote whatever catches our fancy and an event expects.

It’s not that I want to fault the restaurant or their marketing people. This isn’t their doing.  It’s how media works now and how it works best. I love the instant thing and the fact that one can get your message out there.  I use it myself to promote my blog and anything I might post – how could we possibly have done any of this before? It opens new vistas for those who love to write (or want to promote anything else) and want to share what they experience with like-minded souls who might tune into a particular vibe.

It’s not that difficult to give a snapshot and a soundbite about the dishes as they pass you by. The starters feature seared yellow fin, fresh raw peas, avocado mousse, wasabi powder, and pickles; the ‘Black Angus’ carpaccio, quail egg, pomegranate, truffle mayonnaise, and parmesan; the chicken and sundried tomato terrine, with smoked tomato, baby beetroot, radish, apple gel and roast nuts; and my favourite for its originality, the sweet potato and ginger tart, with spicy pineapple gel, corn, lemon cream, and pickled cucumber.

For mains I would opt for the nose to tail eating with the ‘Marino’ lamb cutlet, loin, confit belly, braised shoulder, with pea puree, and asparagus which is hearty and rich in flavour yet strangely works as a summer dish, while with dessert, opt for two classics, lemon crème brûlée or vanilla pannacotta, both with a summer swirl of berries interpreted in different ways.

The accent is on quality ingredients like yellow fin tuna, duck and Wagyu sirloin while punting local with fresh produce and artisanal cheese. Dining at 54 on Bath has long established itself and with their exec chef Matthew Fox inviting all his chefs to the party to contribute their own dish, there’s an individuality to the different dishes which works well.

There’s a lot going in its favour, but sadly for me personally, sampling a new menu, I want an individual bite of food which I can savour if not in my own time, given some time rather than sitting in the middle of a hectic scramble to get it out there briskly please. It’s as if the chase is on because the ice cream might melt before the picture hits its audience.

Is it only me? Or do I simply long to focus on more than just the destination? Personally, eating has as much to do with the vibe as the visuals.