Independent theatre maker MoMo Matsunyane is navigating a new way to create and to secure a future in the arts. She tells DIANE DE BEER about her independence and her latest team effort Dick Or Date? which opens at POPart on Thursday: 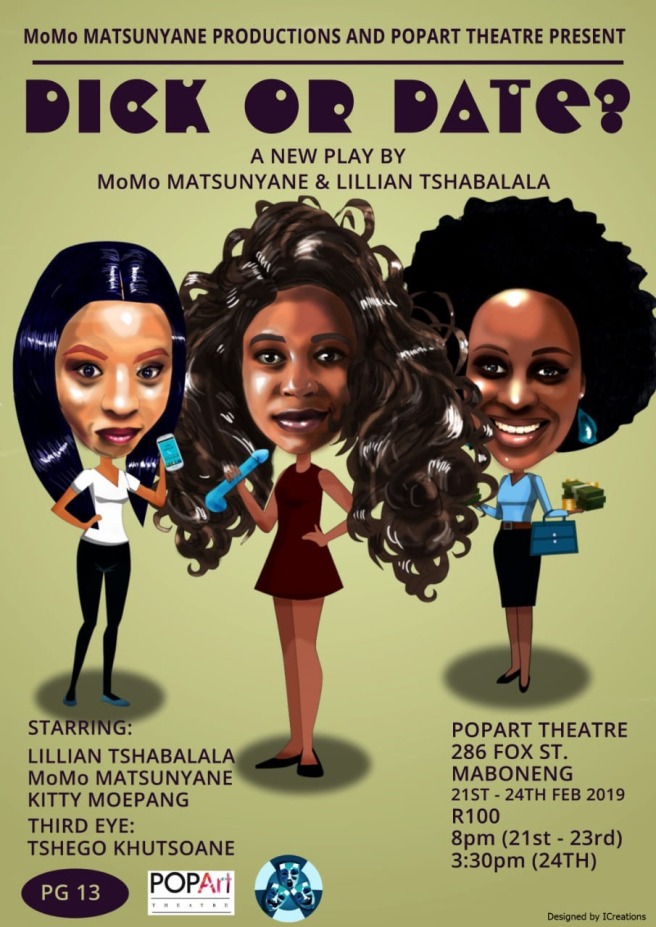 When exciting young theatre maker MoMo Matsunyane suddenly found herself out of work between March and June 2018, she had time to review her life – and especially her work as an artist.

“This time at home made me think really hard about what it was that I wanted to achieve and how is it that as an honours graduate I was sitting at home not working? It was then that I realised the importance of being in control of my career,” she explains.

She knew she had to make her own future work and sprang into action. This led to the establishment and registering of her own production company, MoMo Matsunyane Productions, and working on a new show Dick Or Date? with Lillian Tshabalala.

“I put out a call on Facebook to write a play with someone really funny. Lillian responded with 10 pages of something she was already working on. I thought it was really funny, so we agreed to grow the text.”

The play is about whether it’s possible to find true love online or not and was first called Dating Online but as the work grew and developed in its own direction, they knew they had a slightly different animal to deal with.

“We realised that when it comes to relationships, it’s really between two choices; is he just Dick or are you going to date? And each has its own challenges!”

Dick Or Date? grew into a dramatic comedy that takes you on a love trip with three close but very different friends: Nelly (a hopeless romantic and social media fanatic), Ashley (a privileged young woman who exclusively dates white men) and Maggie, real name, Magogodi (a sex obsessed serial dater who doesn’t believe in love).

Where does a girl go to find her “perfect man” in this instant world of hook-ups and how does she “put herself out there” without looking too desperate? What would happen if women used all the platforms they had available to them today; to date as extensively as they wanted to without judgement? How does one find love organically when it’s readily available online?

One of the delights of this new process was Matsunyane’s discovery that the process of co-writing was so much better than writing alone. “We broke down the storyline and scenes based on what they should achieve. We would give each other homework and slowly began piecing it all together.

“It’s a hybrid comedy and drama which was great to experience as it came to life but it also kept us on our toes because we couldn’t be precious about the work. If something was not working, we had to cut.”

Working in the arts currently is no easy gig as Matsunyane is experiencing while wearing many different hats to make things work. “The industry isn’t as accessible as we think or hope it to be and in the era of social media, popularity also plays a role in who gets the job.”

She knew however that she didn’t want to find herself without work again especially as a creative. That alone could be her driver. “With time, I (and my company) will get to a point where I can put together a team of people who are just as passionate about art as I am and who will help me grow my dreams.”

But ever practical, she knows that it will take hard work and initiative to make her dreams come true. “It will take care of itself. I’m investing in my future and career.”

And she already has loads of experience behind her with winning productions. “I have been producing my own work with a sketch comedy team. I’m a part of Thenx and TAU which has definitely made me more confident in pursuing independent producing.”

Also, these past experiences have taught her how important it is to own your work. “The gear shift now is that I’m an official institution, registered, so I will be able to explore other opportunities that will take my business as an artist to the next level.”

She has the world to contend with though and in a country where the arts have been side-lined for many different reasons, it’s a tough ask for young artists to navigate this closed terrain. “Art has always been political and we know the role it played in liberating our people from the chains of apartheid. However, we also know what isn’t being done for artists,” she says.

“Funds are constantly being embezzled, young artists don’t have enough opportunities and access to collaborate with mainstream institutions and the industry is still too unregulated, which causes a lot of imbalances in opportunities presented.”

She feels they have a long way to go. “The arts survive through people’s passion. Literally. We are called to perform during rallies and at election times but that’s about it. There is a crisis in the industry and we are still too quiet.”

As independent theatre makers, they have had to rely on smaller independent spaces like Maboneng precinct’s POPArt, Thembisa’s TX Theatre and Alexandra’s Olive Tree Theatre to stage our new and experimental work. “I have created a great working relationship with all these spaces and POPArt was more than happy to house us for our debut,” she says thankfully.

“We want the piece to spark critical conversations around sex and relationships. The private becomes public. It’s like having a window into the lives of three young women and how they navigate the dating world in today’s fast paced and technologically advanced society.”