Many South Africans will be travelling to Japan as the host country of this year’s Rugby World Cup and the 2020 Olympics. Following a holiday in Japan in October last year, DIANE DE BEER was invited on a return trip to Hokkaido, the most northern main island. She loses her heart and gives her impressions:

What I probably love most about travelling in Japan is that it is foreign and familiar at the same time.

It’s immediately clear that the Japanese have a different culture, they speak a different language and use a writing system that many foreigners can’t read and yet, there’s a familiarity that’s unmistakable and comfortable.

While you might think that you could lose your way in such a strange land, there’s much that you know and recognise, to keep you in a very happy place.

What should have had me worried when I was invited by JETRO (the Japan External Trade Organization, a non-profit parastatal under the Ministry of Economy, Trade & Industry of Japan) for a brief visit to their most northern main island, Hokkaido, in February, was the weather.

At the back of my mind I could hear someone saying when we were planning our holiday last October that February wasn’t a good time to go as it was the coldest month in that neck of the woods. And a further notice from the hosts about the climate in Asahikawa/Sapporo, the two cities we were visiting, should have been ample warning.

The average ranged at about -6.5 deg with the minimum touching -12. Suitable clothing was suggested as one of the reasons we were traveling all this way at this specific time was for the annual Japanese snow festivals celebrated all over Hokkaido but specifically in these two cities.

Snow hasn’t really been part of my vocabulary but the spectacle of a world clad in white, the texture like powder, the fact that snow isn’t wet until it melts, a cold that leaves you breathless, all of that is part of an other-wordly experience.

The snow festival itself in both cities is about (gigantic in some instances) snow and ice sculptures depicting scenes or characters from Star Wars, which seems to be a popular theme, or anything Disney and some of Japan’s favourite mascots like Hello Kitty.

The festivals ran from February 6 to 11 (it changes annually but not by much) and both cities attract well over a million people from the rest of the country as well as foreign visitors. The area offers fantastic skiing in close proximity to both cities, ice skating, sledding and snow rafting, as well as the wondrous winter canvas with a landscape completely covered in snow.

We had a few bus rides from one city to the next and watching what seems like a silent world go by is stunning. As a child of Africa, I certainly don’t want to live in that extreme weather – we were in Sapporo on the coldest day in history – but I can appreciate the spectacle.

Hokkaido is a fascinating island because, amongst other things, it seems to be the food basket of Japan. It has nearly one-fourth of Japan’s arable land and is a leader in the production of many agricultural products. Different coastal areas are also rich sources of seafood ranging from shrimp to salmon, sea urchin and scallops, sweet snow crab and tuna. The variety is awesome and reflected in the restaurants.

We had spectacular meals ranging from sushi/sashimi to a seafood barbeque; a traditional tasting menu and a unique sea-urchin shabu (hotpot) with the broth mixed with leftover rice the perfect comfort food; buffet breakfasts in hotels, an adventure all its own; the odd ramen and gyozo (dumplings) – and then I haven’t even mentioned the meat. How can one, with the abundance of seafood, unlike anywhere else in the world? Every meal had a scallop or two tucked in somewhere. 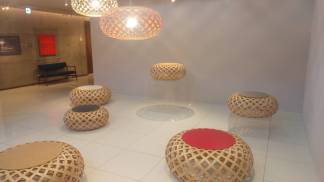 The originality and quirkiness of their designs

Hokkaido also boast a sizeable timber industry, hence their focus during a part of our visit on furniture factories. An entry into this world was slightly puzzling as they don’t export to Africa but I was intrigued by the work ethics and the employer/employee relationship. It also proved the familiar adage that the Japanese are constantly striving for perfection. There’s a reason for everything and its all about the final results.

One specific factory we were taken to for a specialised visit was Takumi Kohgei with the owner, Yoshihiko Kuwabara, sharing his particular philosophy, which he says is what Hokkaido is all about. Most of these factories and this one in particular are not big concerns and perhaps that is why the attention and care heaped on the workers is so impressive.

From the design of this particular factory, which looks more like a high-tech home, to the humidity and temperature control on the factory floor – with some of the workers not even wearing the ubiquitous mask because the dust from the wood was immediately removed by huge extractor pipes, the whole concern is impressive with the end results, the furniture, quite unique.

It is a clever combination of their past and a modern sensibility with possibly a nod to the ‘50s, and their interior accessories are extraordinary. Forty crafts people dedicate themselves to making detailed furniture from indigenous wood and the machines are used only as support.

Visiting Hokkaido in autumn/winter or spring/summer makes a huge difference. These would be completely different holidays – each with their specific attractions. Before I left on the trip, someone sent me a link to Sapporo and there were some amazing art spots to visit, but I realised when there, that these weren’t possible in winter. One was a fantastic sculpture park by artist Isamu Noguchi in Sopporo, as well as a cemetery by the amazing architect Ando Tadao which includes a pool of water and a pathway that leads up to a circular structure accessed via a tunnel. He is famous for his entrances to his buildings and this one with a circular structure with 15 000 lavender plants along the roof, certainly seems worth a return visit.

So are the hiking trails and the natural wonders of this particular island, which was hit by a devastating earthquake only last year. They are desperate to revive their tourism but when you see what they have to offer, it’s not a tough ask.

We had an onsen (hot spring) in our Asahikawa hotel and each night it was an astonishing way to recover all the energy the weather had tapped during the day. The island is especially famous for its range of outdoor onsens, which would also deliver on the complete experience of the Japanese ritual so popular amongst its people.

From participating in meals at the local ramen shop to sharing an onsen, it’s a way to get to know the Japanese people, which in itself is special. In today’s fast life and daily grind, especially in Japan where they struggle with an overdeveloped work ethic, mixing with the people when they find time to relax is your best chance for social interaction.

Having been to the country twice in the past five months, what has become clear is that you need that first trip to discover what you want to do and see in this complex yet completely fascinating country. So if you are off on your first trip, do as much preparation as possible. Find out as much as you can about everything you want to do before you go. It will all contribute to an incredible journey.

* Diane de Beer was invited by JETRO, (the Japan External Trade Organization, a non-profit parastatal under the Ministry of Economy, Trade & Industry of Japan), for a brief spell at the beginning of February to their northernmost main island Hokkaido.