If you haven’t yet made the acquaintance of Ladismith’s Tannie Maria, DIANE DE BEER tells you why you should, in this, Sally Andrew’s third in the series, Death on the Limpopo:

On my first meeting with Tannie Maria, I knew that she was the real deal. It’s easy to lose your heart to any of author Sally Andrew’s characters because the storytelling and writing both have authenticity and a sensibility that make the Karoo and her characters sing.

And by now, says Sally, her small-town characters are well established and she can no longer simply push them around.

Tannie Maria is a kind of agony aunt for the local Klein Karoo Gazette in Ladismith and she tries to lighten her reader’s dilemma with a recipe which should add to a swifter solution of whatever might be bothering them.

Sally describes the other regulars as follows: Jessie, the fiesty young investigative reporter; Hattie a Mary Poppins-like editor and Maria’s boyfriend detective Henk Kannemeyer with the distinctive moustache who keeps a protective watch on the woman who has captured his heart.

Much as the people are the ones that steal the show, the backdrop is the Klein Karoo, a landscape that’s always hovering and means as much to Tannie Maria as the food she uses as nourishment for a healthy mind as important as body. Soul food probably describes it best.

Sally lives(most of the time) with her artist-husband Bowen Boshier in a mudbrick house in a nature reserve in the Klein Karoo. This is where she finds her inspiration, especially when she wanders off on her own and allows nature to play with her over-imaginative mind. It’s also that playful mind that goes into entertainment mode when she plays dress-up for her book launch and introduces some animal characters which she either forgets can talk or puts some words into their mouths. 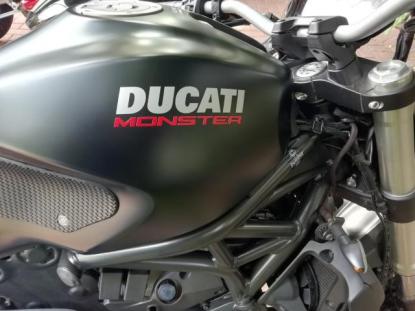 Black Ducati – not to be messed with.

Sally Andrew and myself at her book launch. Picture: Doreen Gough

The biker outfit she wears to these latest book launches, isn’t random. Her latest invention arrives in the Klein Karoo with a screech of tires in a whirlwind of dust on her black Ducati motorbike. Zabanguni Kani is an investigative journalist from the Daily Maverick described by Sally as “strong, black, no sugar”.

There’s no messing with Zabanguni even in this part of the world where she stands out no matter what and Sally views her as her “inner biker chic” but also “the voice of my hardcore activist youth”. It’s an interesting and lively strand that she introduces into a book that deals more than anything with fathers and daughters.

That is bittersweet but perhaps not coincidental as the author’s father was very ill during the writing of this book and sadly died before the Death on the Limpopo was published. “He helped with historical research for this book, sharing his memories, and recommending books and articles to me,” she writes in the Acknowledgements. “He then listened to the whole manuscript as I read him a draft on his sickbed, two chapters a day. He was my best listener and editor, offering insightful comments. He cried quietly at the good bits and snored loudly during the boring bits.”

None of the darker elements in the writing are a surprise. Because of the main character, one might be forgiven if you don’t take any of this seriously, but the essence of the writing is always hardcore as the writer tackles issues in all three Tannie Maria books including spousal abuse, PTSD and there’s a constant quest for healing as her central character deals with her violent past.

As interesting as her characters and story lines might be, what gives the writing weight is the fact that all of this (perhaps not the sleuthing although she does that in her head) is this unusual writer’s real world and the life she leads. 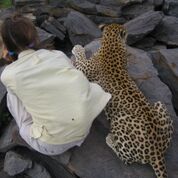 Sally and her wild mates 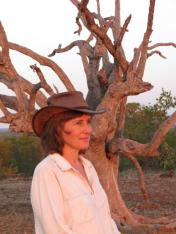 Sally in the wild.

She and Tannie Maria inhabit the same landscape and encounter the same plants and creatures, all of which play a dominant part in their lives.

Then there’s the writing:

The tar ended, as if a black brush had just run dry, and the wheels of my bakkie gripped the earth beneath us. My bakkie loves dirt roads. My red veldskoene got excited too, and added speed to the accelerator. I slowed them both down. I don’t like to go fast in the veld. You never know where there might be a tortoise or a meerkat crossing the road.

It’s evocative as it creates visual pictures that result in a colourful reading as the story races ahead.

Sally tries all the recipes herself and for those she doesn’t attempt, she relies on the help of others and sometimes like for this latest book, she finds specialists like Mari-Louise Guy who with her brother has built a cake and recipe book empire in the Cape.

Mari-Louise for example took the traditional Ladismith recipe provided by Hetty Smit, and then developed the Weerligkoek (Lightning Cake ) which, when reading the recipe, tells you throughout that it is do-able, but seems quite a tough ask. And Sally assures me that the Melktert in the first book is one of the best. And so all her recipes should be, they’re read and experimented with all across the world. Her books are extremely popular and have been translated into many different languages.

You also know, spending some time with the author, that she would not settle for anything but the best. Just doing an interview was quite a mission because she didn’t want to clutter the conversation I was having with her for the Pretoria book launch at Uppercase Books.

I didn’t mind because artists have their own ways, they know what works for them and that’s the right time to indulge their whims.

Anyone who can come up with the Tannie Maria stories and set it in an authentic South African landscape that makes sense, capture the wonders of this country and its people and then do it in a language that has its own rhythms for these particular tales, gets my vote.

Hopefully Tannie Maria still has much life left in her and will keep sharing her stories rooted in the Klein Karoo (or introducing other nature areas as was done here). She has crept into many hearts as we listen to her advice, dreaming of a coffee and poppy seed rusk that comes from her kitchen.