This is the third instalment of this particular story due to COVID-19. The following is a short review of the concert held this past Sunday and Monday in the Atterbury Theatre at 505 capacity but hopefully they can simply play it forward in 2021 so that the rest of the country can also be witness to such a remarkable partnership:

As we slide into the end of the year, especially this one, there’s nothing like nostalgia, which is exactly what Twintig/2020, Nataniël and Charl du Plessis’s 20th anniversary show, represented this past weekend.

It was planned as something far bigger (see below), but these two creative souls were determined not to bend the knee completely to COVID-19.

It’s a masterclass in storytelling, song and accompaniment. After 20 years, these two performers have established a rhythm and rapport that’s unique and contributes to the ultimate success of a Nataniël show.

There is no one who can compete with Nataniël’s storytelling – not in language, his choice of words and how to apply them, tone of voice, imagination, performance and then that final gut-wrenching twist which is the knockout punch. And the examples at this show were formidable. First they had you screaming with laughter and then, as always, in pain.

Because he has a history (in his own mind) of failed albums, Nataniël usually denigrates his choice of songs as well as the singing, but the performance, his music and his unique arrangements, offer the perfect mix. With his high-intensity stories, you need some quiet after the storm – as delicious as it might be. And that is what the music adds together with superb accompaniment by Charl.

With Charl a classical and jazz pianist as well as a solo performer in his own right, they make the perfect pair and listening to the way his music holds Nataniël’s voice – when to swing and when to step lightly – is quite superb. My personal favourites were the exquisite La Memoire d’Abraham, Nataniël’s quiet song 100 Years, a transporting arrangement of You’re my World and then always mesmerising, his very specific rendition of Oh Come All Ye Faithful

Add to that the cracking colour of Nataniël’s couture, the changes and tweaks which all add to the perfect package. Even with 50 % audiences, they don’t present 50% shows, which is why he keeps packing them out. He always presents the best and fans know that. And with two pianos on the Atterbury Stage for the last time (one is being sold), it gave them a chance to play one of their rare duets on stage- always a treat!

Hopefully with a COVID-19 vaccination, they can tour with a 21st anniversary version of their partnership celebration. From the costumes to the songs as well as the stories, it’s great to see his loyal base have been right from the start.

When I first published this story in February, the devastation of the pandemic had not yet reached our shores. That didn’t change any of the facts and stories about the partnership, yet it did change the performance schedule drastically. But now is the time for them to catch up slowly but securely and while their first show on November 15 has already sold out, there are still some seats left for a second extra show the following night, Monday 16 November at 7pm at the Atterbury Theatre in Pretoria.

Nataniël and Charl will celebrate twenty years of music, memories, moods, challenges, highlights and stories. This will also mark their return to the stage after months of Covid-19 lockdown. For this special show, Charl chose his favourite Nataniël stories and his most-loved music from their repertoire of hundreds of songs. (Nataniël has very little say about the contents of this show!)

Presented in English and Afrikaans. No children under 15. Book at iTickets.co.za

Read the original story below about this original partnership:

On February 5, showman Nataniël and his piano man Charl du Plessis celebrate 20 years in performance together. They tell DIANE DE BEER why – in spite of such different personalities – it has worked and turned into the perfect professional partnership:

To witness these two talk about their dual career is to understand their partnership. Because they spend so much time traveling and performing, they can complete one another’s sentences – and often do.

Du Plessis is also one of those caring souls who understands the pressures his funny man must endure daily and when he can, he tries to make life simple and at the same time sweet.

tells him to take the front seat, he understands the artist wants to take a back seat in all the implications of the word.

Theirs is no ordinary life as they arrive at small town halls, discover interior decorations that make them want to burst into tears and have to find a way – diplomatically often – to fix. And diplomatic is hardly in Nataniël’s nature and we love him for that.

Charl is also constantly trying to avoid embarrassing situations because Nataniël on seeing something he abhors might ask if there was a blind mannequin in charge of decorations. It’s Charl’s way to find gentler phrases while Nataniël uses humour to deflect his disdain.

He might be sweeping the foyer while Charl tries to make the dressing rooms habitable – or whatever is needed. “I’m a team player,” says Du Plessis, while Nataniël would rather run a mile. 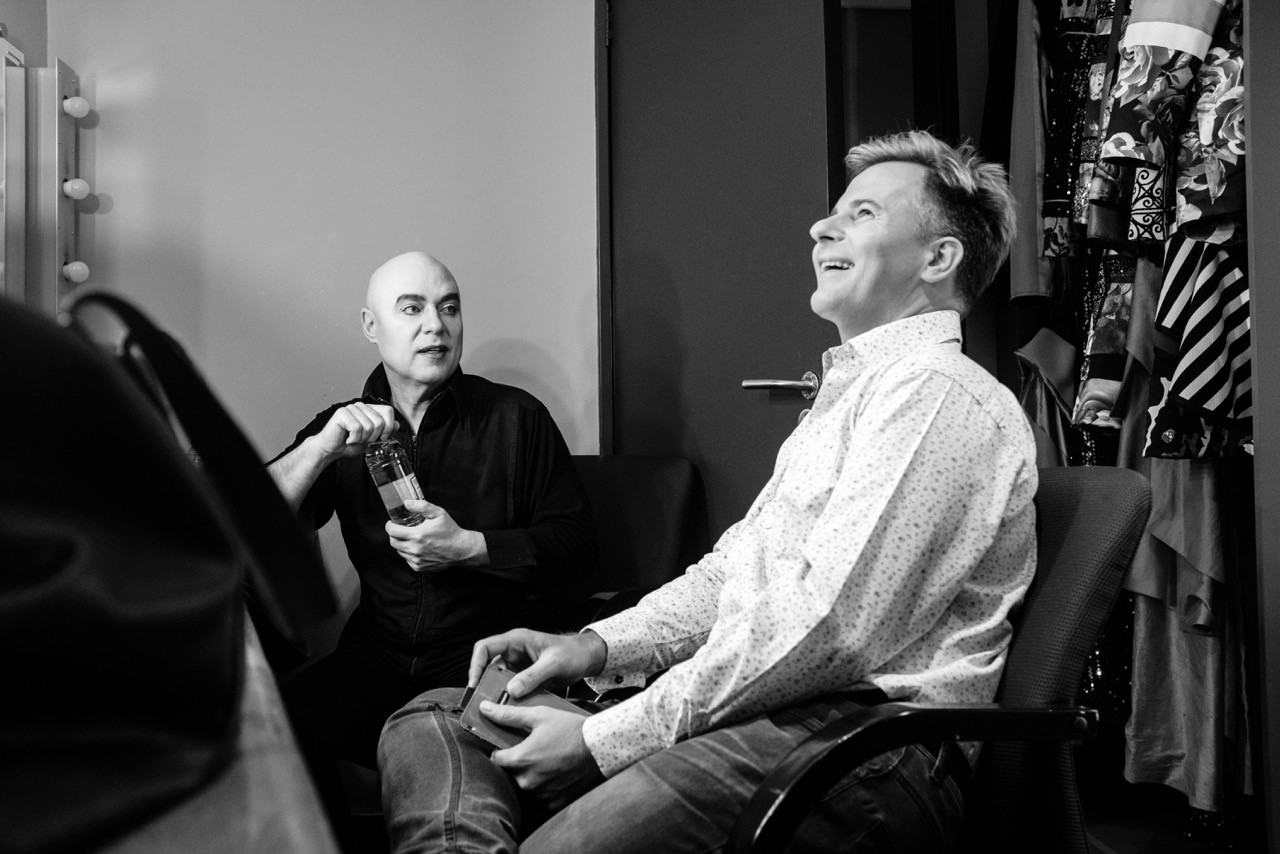 A lamp might need straightening or a straight face needs to save the day when first impressions might include a bed as part of the stage set-up.

But part of that has also impacted Du Plessis’s career in a big way. This is how he learnt the ropes. “He was interested in everything from the beginning,” says Nataniël. He wanted to know it all – from lighting to staging – and today it is part of his own shows.”

Du Plessis has contributed in his own way too. The band,  including Du Plessis, that currently plays for Nataniël is part of the Charl du Plessis Trio that he formed. “It makes it so much easier as we all know one another extremely well.” In fact, I have even heard Nataniël say quite fondly (he will deny this!) that his current company operates like a family

“I have become lazy,” explains Nataniël, because of the energetic Du Plessis who has taken so many of the mundane tasks of performance on his shoulders. For him it is about making Nataniël ‘s life easier. At the beginning, his own career might have been a touch quieter, but these days, he is juggling as many balls as Nataniël and he has to operate on a generous abundance of energy that keeps him running.

“I used to do everything myself …” says Nataniël as he reminds himself of the early days. But that diminishes as you start growing your empire.

Du Plessis at some point even started producing most of Nataniël’s shows. “There are a few theatres I am happy dealing with but not too many,” says Nataniël. These have become Du Plessis’s responsibility and Nataniël knows he will organise it all with the precision he needs.

“I speak for a living,” explains Nataniël, when chatting about his reluctance to communicate off stage. “Have you noticed, hairdressers often have the worst hairdo’s themselves. So it follows … ” He has probably said as much as he wants you to know, on stage, and he is adamant that it is there that he likes surprising people.

I have learnt that through the years of doing interviews about upcoming shows. It’s not that he tells any lies or doesn’t give me information, it’s just that once I’ve written and published and then see the show, I realise he hasn’t given away a damn thing! “What’s the point,” he wants to know?

Even the band doesn’t really know what the show is about before opening night. “We only rehearse the music and the scene changes if we need to carry props or some such, not Nataniël’s stories,” adds Du Plessis. “It’s quite tough keeping a straight face on opening night!”

He also doesn’t like complimenting. “I will say something if it doesn’t work or is wrong,” he says. “I reward with gifts and food!”

That was probably one of the toughest adjustments for Du Plessis. But he acknowledges that there was a neediness to have his talent confirmed by others. It’s been a bonus to bolster his own confidence.

He is constantly writing thankyou notes about something that has happened between them or a particular gratitude he wants to express. And in their own way, they have carved a working relationship that is smooth sailing most of the time.

Right from the start, Du Plessis knew that Nataniël wasn’t interested in technology. He wants everything – like his phone eg – to work, but he doesn’t need to know how. That is just one of the interventions he applies in his boss/friend’s life. And even while chatting, Nataniël has some phone queries that need solving.

“I write everything down in a paper diary,” says Nataniël. Du Plessis’s life  is checked into his phone or other electronic devices.

When he has sung the last note at a concert, Nataniël already has his mind on that night’s supper, which he will buy on his way home. Du Plessis on the other hand is happy mingling with friends and fans in the foyer for as long as it takes. “He networks, me not so much,” says Nataniël.

Du Plessis is happy to chat to anyone who corners him,  Nataniël is thinking how he can avoid a handshake, one of his many foibles. Du Plessis, explains Nataniël, is happy to explain something to someone in great detail. He on the other hand is curt and hopes to detour as many people as possible.

At some point, Charl decided Nataniël suffers from night blindness, and he is the one to drive as soon as darkness descends.

One of their most dramatic moments was when Nataniël ‘crashed’ on stage because of low blood sugar. “With a phalanx of medics around him and the band trying to help where they can, the audience were laughing because they thought it was all part of a joke,” notes Charl as he shakes his head at their sometimes bizarre circumstances.

“Now I know I simply have to eat an apple halfway through the show,” says Nataniël. They love and learn.

And as they chatter, while Du Plessis is the busy bee and the organiser of the two, Nataniël is the one who keeps everyone laughing. Not always purposely, but it’s the way he operates, how his mind works and how he communicates.

And thus it has been for these two artists together – and in their own right. More than anything, what they have in common is their love of the stage and their ability to perform. On stage, they sparkle and shine for their adoring audiences.

May it last for the longest time!

Watch out for further notices on their different websites and on social media for further shows around the country in 2021. This is one fans don’t want to miss. “There’s nothing wrong with celebrating 21 years!”