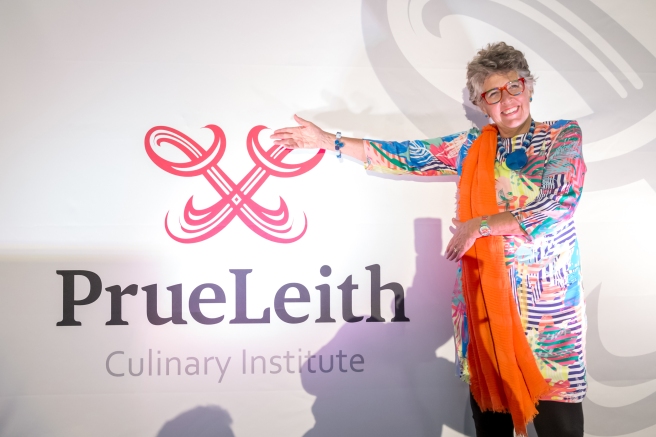 With her recent visit to the Prue Leith Culinary Institute in Centurion, mainly to celebrate their success as well as her 80th birthday, it’s her youthfulness that bowls you over. DIANE DE BEER finds out more about her unstoppable drive:

It’s Prue Leith’s constant refrain when talking about yet another venture, “I’m a  commercial woman”, and how fast she runs her life, that keeps her young. The energy obviously rubs off, that and her exuberance, her dazzling embrace of bright colours, and partner John Playfair who never stops the banter, but also gives a helping hand when she moves around the room for book signings.

That’s just who she is. Instead of asking everyone to stand in line, she moves around the room to do the necessary with John in tow for selfies and anything else she might need, the perfect team.

In town for amongst other her birthday celebrations (she wanted to do some of that in Cape Town as well), she admits that she isn’t that happy that everyone knows her age. But when she opened her restaurant in London at the age of 29, she was loud and proud about the achievement.

Ever practical, Prue isn’t too fussed and chats happily about her many endeavours, of which her return to the food world precipitated much of what is bubbling in her booming business sphere.

At the time of her first association with the food world, the British food establishment was in the clutches of Escoffier (but not in the right way, according to Prue), it had become stifled, always sticking to the rules and not taking heed of the great French master’s advice that one had to move with the times. “It was all about following the rules and if it wasn’t Escoffier, it wasn’t cuisine,” she says.

“You would find all the same items on the menus across London,” she says. When she left, she started campaigning in the food world for good school lunches, for example, and another successful launch was her fiction writing, which resulted in a clutch of novels and a revealing memoir. And she’s still writing because it is something she loves.

After a break of 25 years, she was lured back into the food world as a judge on The Great British Menu and discovered a brave new world. “It was so different with the chefs all turning to flavours from the  Middle East, for example,” and she found herself stealing their recipes.

Suddenly chefs were regarded as the great artists they had become and were taken more seriously. All of this appealed to Prue as after 11 years she was lured to The Great British Bake-Off, replacing Mary Berry when the show moved to Channel 4 in March 2017

Not only is it one of the most watched shows on British TV, it also has a huge younger demographic. “The children are all watching,” she says, which has brought her new-found fame in the food world. “I was absent for so long and suddenly there are new generations discovering me.”

She’s excited about this younger generation who probably all start off baking cupcakes but even if baking is what gets them started, they will follow with cooking meals. She recently participated in the first Junior Bake-Off series with the children ranging in age from 9 to 15 years. “I thought it was unfair, that the younger participants would be at a disadvantage, but it wasn’t the case,” she says.

What she discovered during her conversations with the youngsters is that most of them learnt to bake and cook on Youtube. To her it doesn’t matter how it happens. “The more children bake, the more will cook,” she believes.

Even a stop at a petrol station means endless selfie moments says John. But what really excited Prue with her re-entry into the food world was the opening up of new vistas. She published a new recipe book after a long absence and was urged by her publishers to start with an introductory book covering all her favourite recipes, rather than launching into a specific genre. 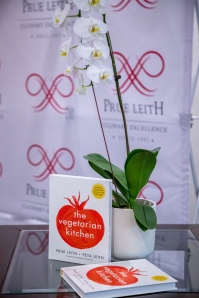 She followed this with The Vegetarian Kitchen together with her niece, pastry chef and vegetarian Peta Leith. “I have wanted to do this for ages but 25 years ago, my publishers advised that a similar title would not sell,” she says. Even though she is not a vegetarian herself, she has always been partial to vegetables and had a full vegetarian menu alongside the main menu in her Michelin-starred restaurant.

These days, she often opts for vegetables but isn’t preachy about it. 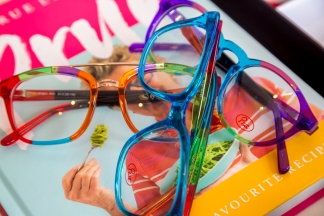 A totally new venture and one she’s eager to promote is her collaboration with eye wear specialists Ronit Fürst. She was quick to make a note of the many people that asked her about the brightly coloured specs she was wearing on Bake-Off.

They were hand painted and expensive but her timing was right when she approached the company to come up with a bright yet more affordable series which is now also available in South Africa. She advises that one simply googles Prue Leith glasses. I did and found a few optometrists in Joburg but with the range available locally, you optometrist should be able to get hold of the distributors. When you see the range, you will want them.

Prue’s advice: “Shoes and handbags spend most of their time under the table. Across a table, people are looking at your face – hence the glasses.” Always the sensible woman.

And then to a matter of the heart. It took Prue a while before she became involved with a cookery school but from the start, she was hands-on with the Prue Leith College of Food (1997) named Prue Leith Chefs Academy (10 years later) and now another decade on, Prue Leith Culinary Institute. She visited sometimes twice a year and was always aware of what was happening and where she could offer advice.

These days with the classy Adele Stiehler-van der Westhuizen as Managing Director and a brilliant female-dominated team of super chefs, Prue hardly has to do more than admire – and she’s smiling.

“I am so proud,” she says and as the trooper she is, she returns enthusiastically to yet another of the many functions hosted on this celebratory visit.

One thought on “Prue Leith: A Splash of Vibrant Colour”