The word Hidden in the title also suggests that much of what is showcased would not all be obvious to even Pretoria residents and for those visiting, would serve as an exciting guide to the many spectacular buildings in the city.

Even having worked in the city centre for most of my life, I was only vaguely familiar with a mosque right in the centre of the city which had through the years become hidden because of certain buildings that obscure it from the public eye.

But because of Swart’s architectural eye and non-Pretorian photographer Alain Proust’s specific and individualistic way of looking at and capturing buildings, the beauty or unusual features of even a familiar building emerge much more strongly.

“With the Hidden Pretoria project the publisher was looking to work with someone in the academic sphere. My focus area at the university is local (South African) architectural heritage which was a good fit with the project.

“ It also made sense for a Pretoria-based academic to take on this task, as a great amount of effort went into ‘location scouting’ and access arrangements for which I called in a number of favours within local architectural and conservation networks. I also have access to a number of archives and libraries that contain information about sites in Pretoria,” explained Swart.

He also had the difficult task of appeasing the highly critical academics among whom he finds himself, while ensuring that the book is accessible to a much wider audience at the same time. “I needed the book to be a responsible account of the architectural history of our city, something that could be prescribed to a student at our department, but also a book that these students would be able to lend to their family and friends as an enjoyable read.” And he certainly pulled that off.

It’s clear that he did extensive fieldwork before selecting buildings for inclusion in the book, and he says that only places that he had visited and where he saw (and felt) a deep quality of place were chosen.

The book serves as a reminder of what the city holds. “Architecturally, Pretoria’s buildings tell the story of a 19th Century republican outpost ignited by the politics of the British Empire, transformed through apartheid-era restructuring and evolving into a 21st century African metropolis,” writes Swart.

In the initial stages, the book posed many challenging questions. For example, which buildings are the most representative of Pretoria’s architectural legacy? What contribution can this publication make to the historical record? How can a broad audience be introduced to the city and its buildings?

His answers to these served a number of aims: Hidden Pretoria is both a momentary snapshot of spaces that might soon change or vanish, drawing attention to their incredible value and potential,  and a photographic documentation of the city, structured and written as an architectural survey. Diverse hidden spaces are exposed, he explains, and ultimately the range of buildings captures the collective spatial identity of the city.

The theme dictated that the book be curated as a journey of discovery revealing a series of surprising spaces in a manner not accessible to the majority of readers. This is enhanced by Proust’s particular eye for a picture.

He has collaborated with Struik Lifestyle for decades, so he was the obvious choice for the Hidden series of which Pretoria is the third city following Johannesburg and Cape Town.

“But apart from that,” says Swart, “I also believe he is one of the best architectural photographers around, the style of his photographs are straightforward in terms of angles and perspective but incredibly good in terms of light, colour and focus etc.”

He was thrilled that Proust managed to get incredible quality and richness out of even the most elemental architectural moments. “He was at moments surprised with the quality of buildings and spaces in Pretoria and I believe the journey of discovery that we embarked on also enthused him to capture the best of Pretoria for a wider South African audience.”

Many of the spaces lie just beyond the surface of known facades, notes Swart. “Historical buildings such as the Palace of Justice and Old Standard Bank are well-known neoclassical edifices in full public view that hide beautifully articulated interior volumes.”

Specifically to capture the intent of the book, the cover picture captures exactly that ethos. It is the most dramatic example of a hidden treasure behind a relatively nondescript facade right in the heart of the city.

The author also explains that some buildings are not only architecturally important but also worth exploring for the hidden objects. The works of artists like Alexis Preller and Walter Battiss, for example, remain locked in the abandoned TPA Building and like the mosque, some buildings are hidden because of their urban context.

For city dwellers themselves, some of the facades have disappeared simply because of familiarity and the interiors are quite breath-taking, yet we walk past them sometimes on a daily basis never having ventured inside.

One of Swart’s aims was to inspire a general awareness and appreciation of the architectural heritage of the city. All the selected buildings are of heritage value and their relevance in the present, can be measured according to a number of themes.

As an architect who works in academia himself, he argues most succinctly and with each building or site also details many facts that would be unknown to those of us who simply see an interesting or historical building – some which we might even in these past decades have turned our backs on.

He points out, for example, that the Dutch Reformed churches at Universiteitsoord and Burgerspark are of particular  architectural and historical interest because they’re illustrative of the Regionalist and Brutalist design approaches that prevailed in the 1960s. Both the Voortrekker Monument and Freedom Park have value as spaces of reflection and debate as they present as reference points for dialogue about identity and memory.

Those who know and visit Marabastad for some extraordinary shopping and food or drive past on their way to the city centre, would have noticed the extraordinary Mariamman Temple, a place of gathering and an anchor point  for the identity of its faith community, says Swart, as he goes on to point out many more features of Pretoria’s unique architecture.

Some would argue about the choices, and others might miss some of their favourites, but no one could be critical about the way the city is showcased from both a public and private point of view.

I loved the few private homes chosen; the fact that the home and work space one of our best artists, Angus Taylor, is featured. Or that House Jooste (Pretorians will know it as Brasserie de Paris) is featured as a homage to Le Corbusier as well as for locals who have a taste for French cuisine and Brutalist architecture. And then there’s Ora Joubert’s Ivy Villa Studio which makes a specific architectural statement, which was also its intent. She has been critical of the mediocrity of design in too many of our suburbs and has taken great pleasure in breaking that mould.

Whichever way you want to use or look at this book – whether a resident of the city or a visitor – it has been beautifully crafted from the selection of buildings and places to show. Extraordinary photographs and informed research guide the traveller, and finally, all come together to present something which is much more than a coffee table book.

And a final word from the author: “Even as a Pretorian who knows the city rather well, I was once again surprised with the intriguing and beautiful places that are to be found in and around the city. It takes a good amount of effort to discover and explore our cities but the personal reward makes it worthwhile.

Polley’s Arcade was named after Polley’s Hotel which stood on the site previously. The sweeping staircase is one of the city’s hidden treasures cherished especially among Pretoria’s architectural community. The intricate floor was built with off-cuts from a stonemason’s yard, which architect, Norman Eaton, used to create an ever-changing woven texture that reflected his interest in African patterns and surfaces. 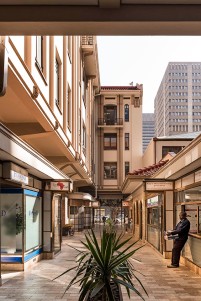 Burlington Arcade is lined with small shops and the original shopfronts supplied by Frederick Sage & Co are still in place.

“ I have a much more comprehensive and embodied understanding of our city after completing this project. It is also remarkable once we start understanding the incredible financial, architectural and social investment that was spent in the making of these special buildings, Pretoria really does have a ‘grand’ architectural legacy to take pride in and be inspired by.

“Another surprise is how wide the spectrum is along which the condition (state of conservation) of buildings can be placed, a surprising amount of heritage buildings in the city really is in almost pristine condition, where other sites are in complete and indefensible decay, perhaps this reflects something of the schizophrenic nature of South African society in general.”

Hopefully Hidden Pretoria will highlight the neglect of some of our hidden treasures, remind citizens of their architectural riches and enlighten visitors who might think the city only offers the Union Building with the monumental Mandela statue and the Voortrekker Monument. There is that but also so much more.