This is another of those books that could be titled #blacklivesmatter and it makes perfect sense that it was awarded the 2020 Recht Malan Prize for non-fiction. As is his nature, Jonny Steinberg perfectly captures this moment in time with his latest illuminating investigative writing. DIANE DE BEER reviews: 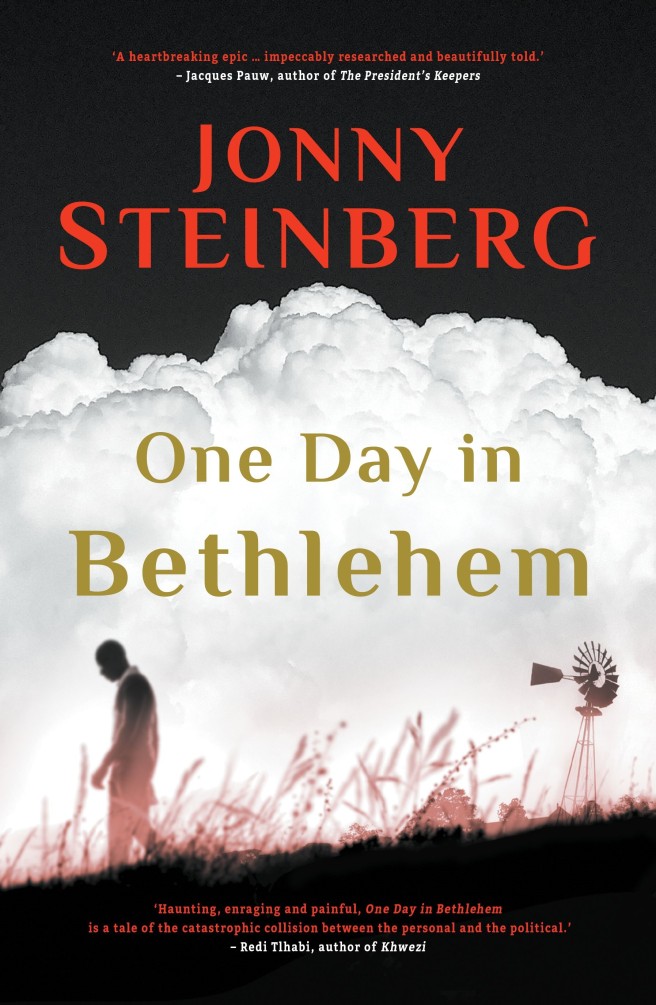 One Day In Bethlehem by Jonny Steinberg  (Jonathan Ball Publishers)

From the Harold Pinter inscription (A thing is not necessarily true or false; it can be both true and false) to the first sentence which states that the author, Jonny Steinberg, could have sworn that he had read the newspaper report that triggered this book in his office, he is at pains to make a point about memory and how people remember things.

Apart from the horrific life circumstances of most of the men featured in this book (they’re all black and tragically, that is the only explanation we still need in 2020), especially Fusi Mofokeng, who is the one focussed on in most detail and depth, he also searches for the truth and how this can be distorted through constant lifelong trauma.

For Fusi, a resident of Bethlehem, life has been tough. And even though he had a rough childhood, nothing could prepare him for what was going to happen to him on the eve of our new democracy – what should have been a time of freedom became a loss of life as he understood it.

The summary on the back page of the book captures it thus: A bakkie full of men armed with AK47s is stopped by two policemen on the outskirts of Bethlehem in the Free State. The men open fire on the policemen and, from that moment their lives are irrevocably changed. So too for Fusi Mofokeng, a resident of Bethlehem, who was not in the bakkie but happened to be the brother-in-law of one of the perpetrators. He and his drinking buddy, Tshokolo Mokoena, are accused of being accomplices and are tried, sentenced and jailed. And then begins Steinberg’s story in his exact, detailed style as he unravels the lives of those involved to get to the nub of the story but also to put you in the shoes of the people whose story is being told.

For most of the white privileged world, this is important because you still today have people saying in total ignorance that the playing field is level, for example. When you follow these lives, you quickly understand that for many people, in fact the majority in the world, this is simply not true and can never be.

When starting to interview especially the two men wrongfully accused and imprisoned for life (they served 19 years), Steinberg found that he struggled to connect with Tshokolo during the first evening and the notes he made were filled almost entirely with Fusi’s words. This is where he focused and why he persisted.

“During his years in prison, the world outside, he said,  slowly emptied of the people he loved.” Already you have a lump in your throat, and this is page 8. It is not an easy read yet as all Steinberg’s work, it is compelling. No one was more reluctant to read The Number, one of his earlier books dealing with prison gangs. It completely overwhelmed me and I have been a Steinberg disciple ever since.

And he does it again. He takes you into the lives of others and teaches you about a world, perhaps unknown and unfamiliar, and brings understanding and much more empathy than you might have had before for your fellow (sometimes world) citizens.

The detail he exacts from his subjects makes sense at the end as he gives you a particular life with specific circumstances, whether it is someone who is reluctant to be treated for Aids, dealing with the harshness of prison life or trying to come to terms with life imprisonment for a crime he didn’t commit. That must be one of life’s most difficult battles and in a world where black men are viewed through the harshest of prisms, Steinberg is at pains to show how Fusi met some Samaritans along the way which gave him courage and confidence to fight for freedom at any cost.

One of those was a social worker in Kroonstad who spotted Fusi’s anger and helped him to understand that eventually it would kill him.

“It’s amazing to me that you are not angrier,” writes Steinberg about an early conversation with Fusi.

“’I was very angry,’ he replied. ‘I realised if I didn’t stop being angry, I was going to die…’

‘I was shown the connection by a warder, a very good man, a white man. His name was Steyn.’”

He took Steyn’s advice to heart and realised it was his only way out.

He wrote to everyone he could think of; officials in government, the ANC, the TRC (which rejected him for amnesty because he didn’t commit the crime) and the list went on. Finally he made contact with Jacques Pauw (or so he thought) and this hard-hitting journalist who uncovered so much of what has gone wrong in this country, decided to check the story of the two innocent life-long prisoners. At the time he headed the Wits Justice Project.

On his way to interview Jacques, Jonny reminisces: “Fusi’s is a tale one resists. One listens intently and thinks one has taken in the depth of it, but it is not so. For one does not want to walk in his shoes.”

And again he encapsulates in that one sentence the thing that gnaws at you throughout reading the book. How and why does this happen to people? And so often the very people who don’t have the means (and here I don’t even mean money) to do anything about their momentous dilemma.

As the book winds down, the author allows himself to speculate, to capture some emotional moments in prose that’s breath-taking. But he also wonders and philosophises about especially Fusi’s life and what would have become of him if this bakkie full of freedom fighters hadn’t stopped over for that dreadful day in Bethlehem.

It’s a fascinating and rewarding read. He has always had the power to tell stories – especially those set locally – that fling the doors wide open and allow us into a problem(s) while bringing understanding and depth to a news headline. Locally but also worldwide, we so easily accuse without empathy or understanding. This is a time to stand still and take stock and Steinberg’s insightful book is a powerful way to do that.

And it seems the time is right. Finally everyone seems to listen and hear that black lives matter.