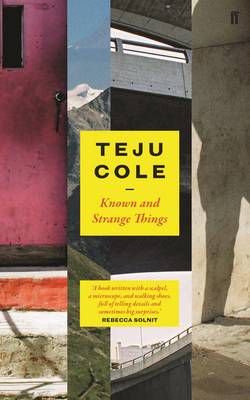 I was smiling from start to finish.

Not because it is all that funny, it seldom is. It’s the way the writer writes with such authority of both subject and language, his frame of reference that stretches wide, offering both the familiar and something else to take a closer look at, and the way he views life through the prism of art whether poetry, photography, film, books and more.

But then he also tackles a wide variety of subjects in a way that’s novel (on paper), brings a point of view that’s confidently his from a lived experience and explains a way of  being experienced by others and thus experiencing the world differently, simply because of a colour of a skin. Many of us yet have to face that dilemma. The world always comes from a particular point of view – or so it seems – ours.

Teju Cole was born in the US in 1975 to Nigerian parents, and raised in Nigeria. He currently lives in Brooklyn and is the author of four books. His bio describes him as a writer, art historian, and photographer, a Distinguished Writer in Residence at Bard College and photography critic of the New York Times Magazine. He brings all of that to bear in this brilliant book.

Explaining in the epilogue, this collection of enlightening and enlightened essays, he notes that in the 8 year period these essays were written, he thought a great deal about poetry, music, and painting, traveled to dozens of countries  and engaged with many interesting artists whom he didn’t write about.

“This book contains what I have loved and witnessed, what has seemed right and what has brought joy, what I have been troubled and encouraged by, and what has fostered my sense of possibility and made me feel, as Seamus Heaney wrote, like ‘a hurry through which known and strange things pass’.”

It is all of this that engages, brings both joy, sadness and understanding of something you didn’t know. That’s not what he is trying to do though, it’s simply a reading of the world which comes from a different life than yours.

He, for example, follows James Baldwin to Leukerbad and notes that it gave Baldwin the way to think of white supremacy from its first principles. It was, writes Cole, as if he found it in its simplest form here. “The men who suggested that he learn to ski, so that they might mock him, the villagers who accused him behind his back of being a firewood thief, the ones who wished to touch his hair and suggested he grow it out and make himself a winter coat…”

Cole’s visit to this same Swiss village is decades later and his experiences come from a different time but the way he chooses to look at particular dilemmas is far reaching and takes you into many different places.

That’s the magician in this creative man. It’s not only what he writes about, it’s how he approaches everything, the way he looks at it,  how art dances constantly through his being – simply who he is and how he puts that across.

In a chapter about the poet Tomas Tranströmer he writes about his compulsion: “The new century has been full of dark years, and I have returned again and again to poets. They kept watch over me and to adopt a phrase of Tranströmer’s, I survived on milk stolen from their cosmos”.

Writing about theatre and what it can do for you, he quotes Annie Carson who explained in the introduction to Grief Lessons, her translation of four Euripides plays: “Grief and rage – you need to contain that, to put a frame around it… Do you want to go down to the pits yourself all alone? Not much. What if an actor could do it for you? Isn’t that why they are called actors? They act for you.”

It’s the way he encapsulates exactly what you have wanted to say for so long. And then he uses language that’s arresting. It’s not unfamiliar but it is the choice of particular words, or swinging a familiar phrase around, that makes you see something so differently or simply see it.

The one thing that he does is to make any writing you might attempt feel completely inferior and writing about him, madness. But I have to share the obsession that has gripped my world for the past few days.

It’s too rare a pleasure not to.