The Louvre Abu Dhabi celebrates its one-year anniversary this month (November 8). On a flight to Japan recently DIANE DE BEER decided to stop over for a little more than 12 hours to see not only the spectacular art collection but also what has already become yet another iconic museum designed by one of the architecture’s superstars, Jean Nouvel:

Flying with a stopover in Abu Dhabi on a recent trip to Japan, it was the ideal time to try to see one of the world’s finest new museums, the Louvre Abu Dhabi. Depending on your flight times, ours landed at 5.55am in the morning and there was a flight to Japan that night at 10 pm, it couldn’t be more perfect.

A visit to the EAU Embassy in Pretoria and their visa office confirmed that a visa would cost R800 per person (with no special concessions for museum visits and the like) and that there was ample transport to and from the airport to the museum and back.

In fact, if you wanted to, you could also pay a visit to other attractions including the Sheikh Zayed Grand Mosque but on this first-time visit, my focus was very specific. It would mean a break and respite on a too long flight with the opportunity of an amazing art foray, not something I had imagined would be possible.

And then I discovered it was – quite easily. It’s not a cheap stopover for those of us on a budget but it’s worth the money and time with the museum and its art, food for both spirit and soul. On the way there in one of the airport’s black official taxis (a cost of approx. R250 more or less, either way) you get some insight of what this pleasure world is all about as you pass Ferrari World as well as the Formula 1 Circuit and Warner Bros Theme Park which also opened earlier this year.

Many would have seen images of Nouvel’s Louvre building, which seems as if it is floating in the sea with a dome and its “rain of light” created by a complex geometric pattern of stars, but nothing prepares you for the experience. On a visit to Gehry’s Guggenheim Museum in Bilbao, it was all about the architecture and this was almost what I was expecting with this Louvre in the Arab world. But, it is something completely different.

Expectations are high as you arrive but with the Bilbao museum, it is the structure in its completeness that overwhelms you from beginning to end – magically so. With the Louvre, almost blindingly white in the blue seas and skies of Abu Dhabi, the full scale is impossible to see as you arrive. You immediately get the design, the water and the cobalt blue sky but the full impact comes much later – like a gift that reveals itself along the way – little by little until finally it takes your breath away. 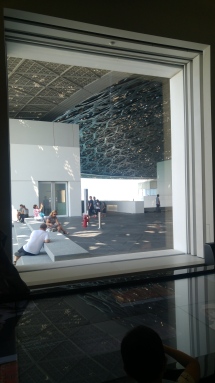 Different window views from inside the Louvre Abu Dhabi 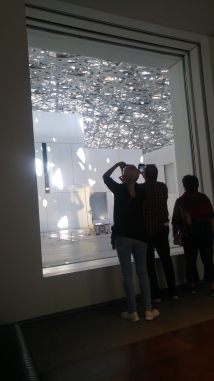 It’s as if the architect captures the mystery which seems so much part of the Arabic psyche. As you start walking through the galleries, Nouvel has placed windows which all differ architecturally and show different aspects and angles of the museum – almost like landscape art in constant motion.

As you round a corner or pass from one room to another, it isn’t until you walk into the domed courtyard with all its different outlets onto the sea that the spectacular play of light and the richness of the reward hits you. Nothing else really matters, even if all the heat seems to have gathered under the dome – and I still don’t know if we were particularly sensitive or whether its an issue that needs to be addressed. We certainly could have done with those cooling water mist systems so popular locally at that point.  Yet nothing detracts from the spectacle or the dramatic effect of finally walking into this imaginative play of light. 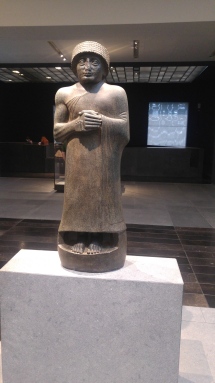 Gudea from Iraq: Wearing a Royal bonnet, his hands clasped at waist-level, Gudea is shown at prayer. This pious king ruled the state of Lagash in the south of Mesopotamia. Neo Sumerian kingdom Iraq, Girsu (modern Tello) about 2120 BCE

Woman dressed in woolen garment: This majestic statuette is probably an important deity in Central Asian mythology. She is seen on other representations in which she appears to pacify the powerful forces of nature. Oxus civilisation; Central Asia, Bactria, 2300 – 1700 BCE 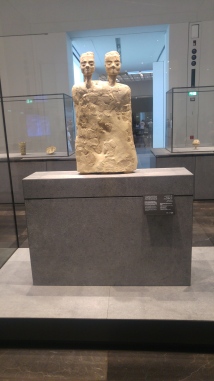 Bust with two fascinating faces: one of the oldest monumental statues in the history of humanity. Jordan, Ain Ghazal; about 6500 BCE

All of this is a majestic work of art, but then, so is the collection of art inside the different rooms and galleries. What makes it so fascinating is the breadth of the exhibitions and the way Western, Arabic and Asian art come together in such unique fashion. This is about viewing different masters from different parts of the world and how they made art in the past and today, who influences whom and what they have to say about their world.

We often speak about the usual suspects in the art world locally and that can also be said of Western art, and this is what makes this such an enriching experience and worth witnessing. It’s not that we don’t see these types of art in other museums, it’s the coming together that makes the difference especially in our diverse world today. Bring it on, lets share and grow with the diversity and difference.

Louvre Abu Dhabi has announced a full season of programming for the 2018-2019 season under the theme World of Exchanges.

International exhibitions will include Japanese Connections: The Birth of Modern Décor (until 24 November 2018), which explores links between Japanese aesthetics and modern French decorative arts; Roads of Arabia (until 16 February 2019), the acclaimed touring exhibition exploring the archaeological and cultural heritage of Saudi Arabia and the Arabian Peninsula; Rembrandt and the Dutch Golden Age: The Leiden Collection and the musée du Louvre (14 February – 14 May 2019) presenting 17th century masterpieces by Rembrandt and artists of his time; and Opening the Album of the World (25 April – 30 July 2019) in collaboration with Musée du quai Branly – Jacques Chirac, tracing early photographic methods from around the globe. The Children’s Museum – also part of the premises – has opened its second exhibition, which looks at real and imaginary animals throughout art history.

The cost of a ticket is approximately (depending on the exchange rate), R230 per person and if you want an audio guide, that will be another R80 but I felt the information on the work all around the museum was more than adequate and the guide for me personally, removed me rather than brought me closer to the work. So altogether, stopping over, the visa (R800) and the transport (R500) would cost in the region of R2 700 for two people. That doesn’t include any refreshments and you do need some, not at the museum for those on budget but you could indulge in an Abu Dhabi meal if food is a passion and then do some more investigating of the city.

Hotels, especially luxury ones, are also plentiful and to make the excursion more meaningful you could stay over, take a trip to the old city of Dubai (which is about 75 minutes away by car), but this would all take more money and time.

For me, for now, the exceptional art and exquisite building was more than enough and something I wanted to savour. And in the future, there are plans to further expand the galleries to include a Guggenheim and more.

3 thoughts on “Lightness of Being at Louvre Abu Dhabi”